The most popular trap stars in school. 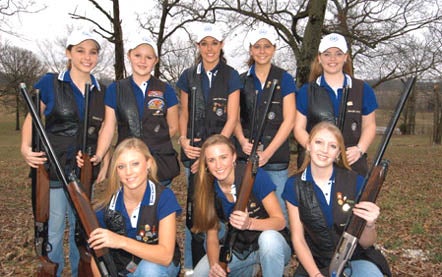 Imagine a weird parallel high-school universe where the pretty, popular girls carried shotguns instead of pompoms. Such a dimension exists, not in the Twilight Zone, but in McKenzie, Tennessee, where the all-girls trapshooting team includes beauty pageant winners, cheerleaders, and the homecoming queen.

“People look at these girls and say they’re too pretty to be shooters,” says coach Lance Rider. “But they’re serious about it, and it shows in competition.”

In just its second year, the team has captured the imagination of little McKenzie in northwest Tennessee. The whole town participates in Fun Shoots for its benefit; last year they raised $10,000 to send it to the Grand American Handicap in Vandalia, Ohio. “This is a football town, but we’re getting more attention right now because we’ve won more competitions,” says senior captain, class president, honor student, and homecoming queen Rachael Clark, who, like several of her teammates, had never shot before joining the team. “I thought shooting would be scary. It’s not at all.”

The girls’ team is part of the National Shooting Sports Foundation’s Scholastic Clay Target Program, which is designed to spark interest in the shooting sports among grade-school students by introducing them to registered competition. The program has 5,000 shooters in 35 states.

This year, McKenzie High School had 64 students join its coed SCTP squads, including two more pageant winners for the all-girls team, who will likely help McKenzie retain its unique edge in coed competitions. “Other coaches complain that my girls distract their shooters,” says Rider. There might be some more complaining at the state SCTP championship in June.