Advice from the world's best wingshot. 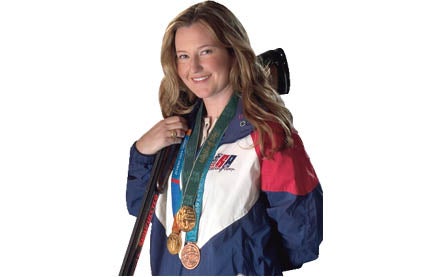 Kim Rhode has a bunch of blond hair, long, white-lacquered nails, bangles on her wrist, and bite marks on her arm courtesy of her pet iguana. She looks like nothing more than the animal-loving pre-veterinary and art student she is. The 25-year-old Rhode is also America’s top Olympic gun, having won a gold medal in double trap at the 1996 Atlanta games at age 17, and taking bronze in Sydney four years later and a second gold in Athens last year. At the 2005 Shooting, Hunting, Outdoor Trade Show in Las Vegas in January I asked her point-blank what makes her an Olympic champion.

“I’ve been told I have exceptional eyesight and eye-hand coordination, but anyone could win a medal if they trained as much as I do,” she told me. Want to shoot like Rhode? Here’s what you need to do:

Get Confident
Rhode possesses the high-brass confidence that is every great shotgunner’s secret weapon. “You have to step onto the field knowing you can hit anything,” she says. “If I told my coach I was afraid of a certain shot, he’d hand me a flat of shells and tell me to go shoot it 250 times.” Part of Rhode’s supreme self-assurance comes from grueling practice and top-level coaching, but it’s also hardwired into her personality. In other words: If you think you’ll miss, you will.

**Practice Smart **
Rhode shoots 800 to 1,000 shells a day, rain or shine, but she doesn’t simply shoot endless rounds of trap or skeet. “If you miss, you don’t get to try that shot again until the next round,” she points out. Instead, Rhode drills single stations, either shooting from one station on the skeet field or shooting trap from one post with the machine locked on a single angle.

“I shoot the same shot over and over and try to break 25 straight. If I miss, I have to start over. It builds pressure, like a mini-competition.”

Know Your Gun
We all know the value of patterning our guns, but most of us never bother to do it. Yet a timely session at the patterning board helped Rhode win her second gold.

“Leading up to the last Olympics I was missing and dusting a lot of birds I should have smashed,” she says. “Two weeks before the games we patterned my gun and found that somehow the fixed chokes had opened up. We sent it to Briley to have the chokes tightened. I got it back the day before I left for Athens.”

[NEXT “Story Continued Here…”] Rhode also shoots her guns from a sandbag rest at a paper target to test their point of impact. “That eliminates the gun as a variable. If you miss, you know it’s your fault.”

Deal With the Misses
One or two misses at the Olympics can spell the difference between a medal and the also-rans, but Rhode has learned to take missing in stride. “When I miss, I think about why, and I go on,” says Rhode. “Getting upset will only make me miss again.”

Focus in the Field
Rhode, who hunts mountain quail, believes that most hunters miss birds because they rush their shot. “When a covey of quail gets up, people panic and start shooting. They don’t take the extra second to pick out one bird and really look at it. You have more time than you think. Pick one bird, then one part of the bird. Narrow down the big picture. When you do that the birds look slow-and clay targets look like trash-can lids.”

Shotgun Combo Gauge
Proper stock dimensions are critical to good shooting, and the Robert Louis Co.’s Shotgun Combo Gauge (800-979-9156; shotguncombogauge.com) allows you to easily and precisely measure a gun’s drop, length of pull, and pitch all with one instrument. Made from aircraft-grade aluminum, the SCG makes short work of the awkward chore of measuring stocks. The gauge costs $119.