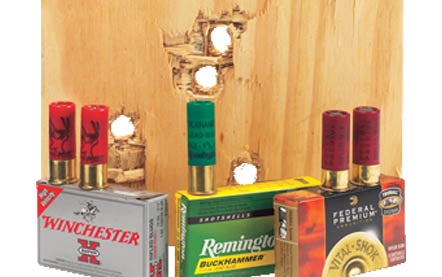 There are three good new widebody slugs for 2005, two of them Foster-style (meant for shooting out of a smoothbore) and one with an attached wad (designed for rifled barrels). I took some of each to the range, set my targets, and let fly. Here’s what I saw.

**WINCHESTER POWER-POINT **
Winchester’s 23/4-inch 12-gauge Power-Point Foster-style slugs weigh a full ounce and leave the muzzle at 1700 fps, 100 fps faster than standard loads. Power-Points hit with significantly more energy and shoot slightly flatter than do slower loads. They look different from standard Fosters, too-the “rifling” extends all the way up to the hollow point. That change is largely cosmetic. The real work in designing these slugs was in making them tough enough not to fragment when they strike a deer at high velocity.

They shot quite acceptably for me. Out of a fixed-barrel, smoothbore Ithaca 37 with an Improved Cylinder choke tube (open chokes like IC, Skeet, and Cylinder work best with Fosters) and a Leupold VX-II 1XÂ¿Â¿Â¿4X scope, the Power-Points grouped under 4 inches at 50 yards.

** FEDERAL TRUBALL**
By slug standards, Federal’s new TruBalls achieve wondrous accuracy. I easily made three-shot, 2-inch groups at 50 yards with TruBalls from the same scoped Ithaca 37. The TruBall’s secret is a hard plastic ball fitted into its hollow base. This helps achieve “concentric obturation” of the slug, which is what engineers say when they mean that the slug expands to seal in the bore without becoming misshapen and off-centered. The ball also projects a short distance from the base of the slug and fits into a dimple in the wad, holding the slug and wad together as they race down the barrel, yet allowing them to separate cleanly as they exit.

REMINGTON MANAGED-RECOIL BUCKHAMMER
The BuckHammer has an attached wad that stabilizes it in flight, sort of like the tail of a badminton bird. New for this year, Remington offers rifled-shotgun shooters a Managed-Recoil version, weighing 11/8 ounces, with a muzzle velocity of 1350 fps. These kick significantly less than the standard 11/4-ounce, 1550 fps BuckHammers (pictured) that are, frankly, brutal to shooters. Out of a Weatherby 12-gauge SAS with a rifled barrel and a Bushnell Banner 1.75X¿¿¿4X scope, they grouped 31/2 inches at 100 yards.

** DEAD-ON SHOOTING **
Although all these slugs are ballistically capable of hitting a deer in the vitals at 100 yards, that’s still long range. Zero any of these loads at 50 yards and you’ll have to hold about 6 inches high at 100 yards. If the wind is blowing, you’ll need to worry about drift as well.

With a 50-yard zero, however, you can hold dead on to 75 yards, knowing the slugs will hit less than 2 inches below point of aim. Most whitetails are shot at less than 100 yards, making these new slugs good choices if you want to tag a buck and still get change back from a $10 bill when you buy your ammo.

Gunsmith Bits
They say a poor craftsman blames his tools. Now that I have Wheeler Engineering’s Professional Gunsmithing Screwdriver set (800-243-3220; midwayusa.com), I am clean out of excuses for messing up my guns. If you’re going to change recoil pads or install bases and rings, you need to use the right-size bit to avoid wrecking the screw slots. Chances are very good that you’ll find exactly the one you need in the Basic Set ($60), which has 72 bits, including doubles of the thinnest sizes in case you break one.