Philip Bourjaily put this new shotgun through its paces this January shooting pheasants, quail, and mallards. Here's his review. 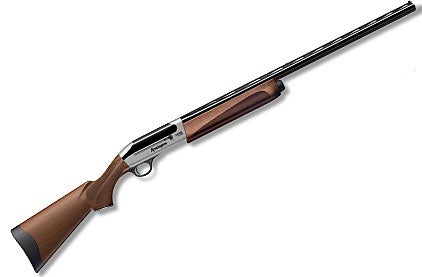 Remington’s new 105 CTi autoloader is the most innovative new shotgun I’ve seen in a long time. The company set the standard for all-load autos with the 11-87 almost 20 years ago, but had fallen behind the “B” guns (Browning, Beretta, Benelli). This state-of-the-art auto catches Remington up with the competition and maybe even puts it a step ahead.

What’s so great about this gun? It’s light, for one thing. CTi stands for Carbon/Titanium. The receiver is made from a piece of skeletonized titanium with a carbon fiber insert filling in the holes. The rib is carbon fiber as well. The result is a gun with the solid strength, profile and feel of an 1100/11-87, that weighs a good pound less. The 12 gauge 105 CTi with a 28-inch barrel comes in right about 7 pounds Â¿Â¿Â¿ perfect for carrying all day through waist-deep CRP grasses after pheasants.

You’ll notice, too, that there’s no ejection port in the side of the receiver; the 105 CTi is the first bottom-ejecting autoloader ever made. We left-handers will love that feature, as will trap and skeet shooters, whose empty hulls will be deposited in a neat pile about a yard in front of their toes. Waterfowlers won’t have to worry about bouncing empties off the head of the shooter to their right anymore, either. To load the gun you simply open the bolt and shove a cartridge up the magazine tube. The action shuts automatically, whisking the shell into the chamber.

Finally, the 105 Cti kicks less than any autoloader I’ve ever shot. It has a soft R3 recoil pad on the butt, but the real secret is the unique oil-filled shock absorber called a “rate reducer” in the stock. The rate reducer’s main job is to control the speed of the bolt so the gun can function without beating itself to pieces. The faster the bolt comes back, the more the oil resists. As a pleasant side effect, the rate reducer absorbs the recoil energy of the bolt and other moving parts in the gun. I always believed 1100s and 11-87s to be the softest shooting of all gas guns, but the 105’s recoil is even milder.

In late January, I was one of a group of five writers Remington invited to Deer Creek Lodge in Sebree, Kentucky. We were the first people not involved with the project to shoot the new gun. In two days we ran a couple of hundred rounds apiece through the 105s at pheasants, quail, and flighted mallards. The guns functioned with light game loads and high velocity waterfowl ammo alike, handling smartly and soaking up recoil. I should mention that the guns we shot were not final production models. They did exhibit a couple of small glitches with the trigger and extractor that have already been fixed as of this writing.

The 105 CTi has been a long time in getting off the drawing board and into the hands of shooters (I think the “05” in its model number refers to its intended year of release). It will be available at first with a satin-finished walnut stock and blued metal, in 12 gauge with either a 26 or 28-inch overbored barrel. The gun lists for about $1200, and, frankly, I had expected a higher price tag after looking at and shooting it. Remington plans to have them available before mid-year.