The Model 870 is the greatest success story in the history of U.S. Shotguns because of one simple quality: It just won't quit. 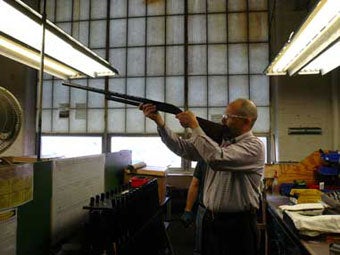 A few years ago I had the good fortune to share a blind with a world duck calling champion. I asked about his shotgun, an expensive Italian autoloader. “I only shoot this because I won it (at the world championship) in Stuttgart,” he said. “If it gets bad cold, I bring my 870. It always goes bang.”

Since 1950, Americans have known the Remington 870 pump action as the gun that always goes bang. There aren’t many gun cabinets in the United States that don’t contain an 870 (mine has four). In some safes, it’s the foul-weather gun; in others, it’s the go-to gun. In many, it’s the only gun.

Like the Ford F-series pickup or the Levittown house, the 870 stands as a classic example of the best of postÂ¿Â¿Â¿World War II mass production. It is sure-shucking, indestructible proof that American manufacturers can build goods inexpensively, in huge numbers, and still make them well. Stamped, cast, and common parts (shared with the 11-48 auto) made it cheap to produce. In 1950, the first 870s cost $69.95, $15 less than their predecessor, the finely machined Model 31, which was discontinued in 1949.

Nothing was cheap about the new gun’s performance. Remington representative Rudy Etchen took one of the earliest 870s made to the 1950 Grand American Handicap. There he became the first shooter ever to break 100 registered trap doubles with a pump gun. Remington knew it had a winner and never looked back.

My plan was to conduct a quality-control spot check during the run-up to No. 10 million. I’d be at the factory to catch the gun as it popped out, then I’d trundle the newborn straight to the turkey woods and shoot a gobbler with it. It was the least I could do for an American legend. [pagebreak] The Birthplace
The Remington factory stands squarely in the middle of downtown Ilion, about 3 miles from the forge where Eliphalet Remington made his first rifle barrel in 1816. As the business grew, he built an armory on the banks of the recently opened Erie Canal. To¿¿day, the factory sprawls over the exact site where Remington located his building in 1828. Countless guns, both sporting and military, have been made here for 179 years.

As befits an iconic American arms maker, Remington’s red brick factory is tall-tale huge: four stories high and so big that the night watchman walks 7 miles to make a single round. Most of the plant dates to Remington’s expansion in the early 20th century as the company geared up to make arms for World War I.

Stacks of bar stock stood piled high like 2x4s in a lumberyard in the storage area where my tour began. Each bar becomes several receiver blanks about 8 inches long and weighing 7 to 8 pounds apiece. Barrel blanks come in as drilled steel tubes. My guide, shotgun operations manager Joe Pugliese, told me that Remington now sources stocks from another maker. They arrive completely finished, with recoil pads installed. [pagebreak] The Labor Ward
During my visit, I never saw more than a handful of people at a time. Remington employs 900 workers. This sounds like a lot until you divide them into three shifts and scatter them throughout a million square feet of factory. I had expected an assembly line, with 870s on conveyor belts rolling past workers. Instead I found a series of big rooms full of machines with only a few people in each. The employees I met were proud of their work and enjoyed talking guns with me.

The equipment here ranges from old to ultramodern. Some receiver blanks go to a setup called an FMS (Flexible Machine SysÂ¿Â¿tem), a computerized marvel. To make an 870 receiver, 16 cuts are required.. The FMS creates them in several blanks in a matter of hours-precisely and simultaneously. The other receiver line consists of 16 machines that date to the end of WWII, each set up to perform a single operation. These milled the first 870 receivers 57 years ago. “They do a good job and they were paid for long ago,” Pugliese pointed out. “There’s no reason to replace them.”

Meanwhile, in another section of the factory, a robot stretches 18-inch barrel blanks to length. Then, on a series of machines, blanks become barrels: They’re cut and crowned, straightened, polished, and inspected for weak spots by electrical discharge. Ribs are welded on, retaining rings are brazed, and then the steel is stress relieved at 1,200 degrees F. Barrels and receivers never meet until they come together on the fourth floor in the Assembly department, along with all the other parts of the gun. [pagebreak] Ready for Delivery
In Assembly, I got to put the finishing touches on my gun. The custom shop had already ¿¿laser-engraved Built by Phil Bourjaily on the stock, which was very nice but kind of like crediting the husband who cuts the umbilical cord with giving birth to the baby. Stocker Robert Bennett helped me put on the stock. Before we did mine, he let me practice on an 870 slug gun. I put a bearing plate on the back of the receiver and pulled the recoil pad off the stock with an electric drill. Then I slipped the stock over the bolt and tightened it with another drill before replacing the pad.

“I’ve got a couple hundred you can practice on if you want,” said Bennett. I declined, but one of you out there is buying an 870 Express slug gun with a stock I bolted on. Don’t worry-Bennett checked my work carefully.

I moved to another station, where builder Charles Roberts watched me put in the bolt, slide, and trigger assembly. Then we ran my gun through an inspection. Using a pair of dummy steel cartridges (on one the rim was the proper size; on the other it was too thick), we made sure the gun would shoot when the bolt was fully closed and wouldn’t shoot when it wasn’t. I filled the magazine with dummy cartridges and cycled them through to check function. From there, I took the gun to the proof gallery, where we put a proof load in the chamber and fired the gun remotely inside a steel box. After a muffled boom and an inspection, we took a hammer and stamp and knocked a proof mark on the breech. My gun was ready to hunt. [pagebreak] Hunting With No. 9,524,500
I couldn’t legally take the 870 with me from the factory, but Pugliese promised they would ship it to me in time for my turkey hunt in Tennessee the following week. (In Eliphalet Remington’s day, shipping was a matter of standing on a bridge over the Erie Canal and waiting for a barge. As it went under the bridge, you raised a plank and passed the gun to a deckhand. Then you wrote the buyer a letter telling him which barge carried his purchase.) After a fruitless trip in Tennessee, however, and several empty-handed hunts at home, I started to wonder if I might be the weak link in this plan.

Then I got lucky. A gobbler and I ran into each other in the woods, both of us on the way to the cornfield where he had been strutting every day at midmorning. Either he was early or I was late, but the important thing was that I saw him before he saw me. I ducked behind a soft maple and yelped once. When the tom was 25 yards away, I pulled the trigger. The gun went bang, as 870s always do. It might not have been a classic turkey hunt, but the shot completed the journey of a classic shotgun from factory to field. No.‑9,524,500 passed the test. They can get started on No. 10 million anytime.