Get In Shape, Shoot More Accurately

How being fit will help you choose the right rifle and kill more game. 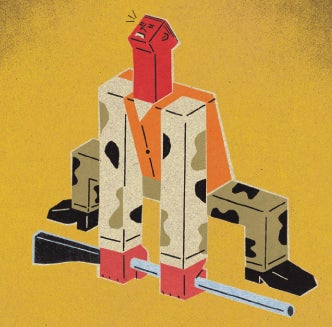 In my college days, wrestlers tried to get down to unnaturally low weights, the theory being that someone who starved himself down a weight class would have a strength advantage over a naturally smaller man. We had a fine wrestler who was a natural 177-pounder but insisted on competing at 167. He starved and dehydrated himself and often went on the mat woozy. On one occasion, he shook hands with his opponent and immediately passed out, neatly forfeiting the match. If he had stayed at 177, he would probably have done as well and certainly have suffered less. And so it is with rifle shooting—a little weight can be a good thing.

Until the 1980s, rifles came in three weights—moderately heavy, heavy, and hernia. Guns had always weighed a lot because hunters were generally in good shape and only a few malcontent gun writers complained about rifle weight. Producing truly light rifles would have required extensive and costly redesign and lots and lots of expensive ­re-tooling.

Then two things happened. First, we transformed ourselves into Lardass Nation. Second, good hunting became a lot more expensive, and the people who could afford it were mainly porkers in their 50s and 60s. They howled for lighter rifles, and so in the mid-1980s we began to see guns that would blow away in a mild breeze. But there were complications.

STEADY HELP: In rifle design, everything is a tradeoff. When you remove weight, you make a rifle easier to carry but you also make it harder to hold steady, and sometimes you need steady very badly. Years ago in Colorado I was hunting elk at 8,000 feet and spotted a 5×5 bull uphill from me. The only way I could get a shot at the unfortunate ungulate was to sprint 40 yards nearly straight up to a little plateau.

Since sprinting 4 yards on the flat at sea level is an effort for me, I was on the verge of having a coronary by the time I got into shooting position, but I was nonetheless able to aim, courtesy of the 91/4-pound .338 I was carrying. It was no fun to lug around, but it was steady even when I was heaving like a bellows.

Based on my own experience, here’s a rough guide to what big-game rifles should weigh with scope aboard:

Recoil is also affected. A light rifle, chambered for a hard-kicking cartridge, will pummel you. The only way to avoid this is to use a muzzle brake, which creates problems of its own, including added length and weight, and an inhuman ­ear-shattering muzzle blast.

IF YOU’RE A HARDBODY: Hunters in good shape can carry a heavy gun with no trouble. I am practically teetering at the edge of the grave, but last fall I carried an 11-pound .375 H&H for four straight 12-hour days in the hilly country of northern South Africa and did not perish. Some years ago on a nilgai hunt in South Texas, I borrowed a 12-pound 8mm Rem. Mag. that had been built for Craig Boddington, and I tiptoed through the ticks and the rattle­snakes for four days without perishing. When I did get a shot, I had to hunch over the rifle with the scope an inch from my forehead. I resigned myself to a major scope cut and pulled the trigger, but what I got instead was a gentle nudge and a dead nilgai bull. Sometimes heavy is beautiful.