Using a Blind Instead of a Treestand

I've hunted from a tree stand for whitetail, but get a bit nervous because of the height. I'm thinking of using a pop-up blind. What do you think of them? Do you recommend any particular ones?--L.P. 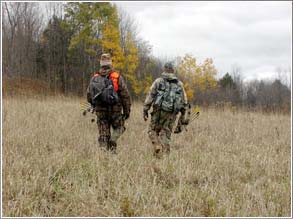 Q: I’ve hunted from a tree stand for whitetail, but get a bit nervous because of the height. I’m thinking of using a pop-up blind. What do you think of them? Do you recommend any particular ones?–L.P.

A: I don’t much care for tree stands either, though not because of the height. They simply lock me into one place too much, without any possibility of getting a shot at deer coming in at the “wrong” angle. I prefer just sitting in the woods rather than any sort of portable blind, mostly because whitetails are very aware of their territory. Any new and different object jingles the alarm bells inside their heads. If left in the woods long enough for deer to get usd to it, a pop-up blind stands a chance of being stolen, just like a tree stand.

Instead, try finding a good place to sit. Avoid sitting behind brush or rocks any higher than your chest, and look particularly for some natural object behind your head to break up your human outline. If bowhunting it’s best to sit on a folding stool, which of course also works for gun hunters. But gun hunters can also sit on the ground or a foam pad.

Camo helps a little, but the main secret to ground-sitting is keeping still. Some variety of scent-block (whether spray or clothing) also helps, but doesn’t eliminate the need to pay close attention to the wind.

**Q: **Is there a .308 Winchester round large enough to use on elk or black bear? IÂ¿Â¿m interested in a couple of different rifle models and they only shoot .308’s.–I.P.

A: Several .308 factory loads do excellently on elk and black bear. I’d especially recommend Federal’s High Energy load using the 165-grain Trophy Bonded Bear Claw, or either of two Winchester Supreme loads, one with the 150-grain Nosler Partition Gold, the other with the 150-grain Fail Safe. Any of these will shoot flatter than any 180-grain load on the market, and penetrate more than deeply enough on elk or bear.