Hunting's most vocal activist sounds off on why we're failing at what should be our highest priority: getting kids involved. 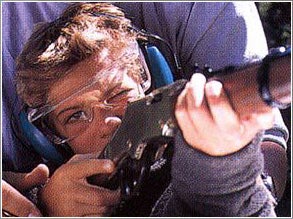 Ted Nugent is actually painfully shy-when he’s asleep. If he’s awake, the 53-year-old rock guitarist and shooting sports activist is either celebrating the glories of hunting or excoriating the hypocrisy of vegetarians, antihunters, and the liberal anti-gun media. As the Motor City Madman, Nugent has sold 30 million albums since 1967 and still plays more than 150 shows a year. But it’s as a take-no-prisoners defender of the rights of hunters, anglers, and trappers that he may make his most lasting mark. He’s the guy who coined the phrase “whack ’em and stack ’em,” who coauthored with his wife, Shemane, a bestselling cookbook called_ Kill It and Grill It_, and who unabashedly delights in “blowing big holes in bull elk and then eating them.” He is a board director for the National Rifle Association, a life member of more than 30 other prohunting organizations, and a regular on TV and radio talk shows, including those hosted by Rush Limbaugh and Bill Maher.

To Nugent, a father of four and a grandfather, the Second Amendment right to bear arms is but an echo of something deeper: the moral duty to be able to defend yourself at all times. He sees the current debate about hunting and gun rights as a “cultural war” in which there is no middle ground. Those not actively promoting hunting rights, gun ownership rights, and wildlife conservation are “helping the enemy.” FIELD & STREAM spoke with Nugent recently about another topic close to his heart: recruiting young hunters into the sport’s diminishing ranks.

**FIELD & STREAM: What do we need to be doing differently to bring more kids into hunting? **

TED NUGENT: We need to change before it kills us. I’ve been reading outdoor magazines my whole life, and I’ll tell you the problem. I’ve seen no upgrade in quality, no dynamic pursuit of intellectual challenge, no real demographic outreach. The whole shooting sports industry suffers from the most unbelievable good-ol’-boy, status quo mongering I’ve ever seen. We are an ever diminishing clique that talks only to itself. And that’s a prescription for the end of hunting and fishing as we know them.

TN: We should stand up and be absolute and unapologetic about not only admitting but celebrating what we do. I’ve always celebrated that I kill many things for many meals. And I don’t say harvest _or _take, I say kill. Because for you to eat, something has to die. And the vegetarians all say, ‘Oh, I don’t. I eat tofu!’ Well, guess what? That soyfield your tofu came from supported a whole ecosystem of mice and rabbits and hawks and insects. And when they cut it down, they killed every one of those critters. The outdoor industry [BRACKET “must”] convey the honest message that, hey, we’re consumers, we’re killing stuff. And what we’re killing is a renewable resource that we’re taking care of-just like we’re taking care of air, soil, and water quality-so we can kill more stuff. Until we do that, nonshooters and nonhunters won’t be attracted to listen to us.

We’ve got to build some kind of bridge to the lost generation, the teens and preteens out there who have no idea what hunting is. And how do you do that? Let me put it this way: You don’t sell pickups by promoting air bags. When the car companies want to sell you a truck, they go out and wreck half a dozen of them just to get you the footage that’s exciting enough and extreme enough for you to want to get that truck. Meanwhile, what are we doing? We’re showing the same old Leave It to Beaver stuff we’ve been using for decades: grandpa and a kid walking along to some tinkly piano music while the old man cracks the over/under when they come to a fence. Safety’s an important message, but read my lips: It’s not how you sell the sport!

TN: What I’m saying is that kids want intensity, fun, excitement. They want things that are uppity, cocky, unapologetic, and extreme. Those terms have always been considered negative by the industry. And my message is, Guess what, kids? Hunting-that is, stalking wild animals, killing them with a big-bore weapon or with a bow up close and personal, and then gutting and eating them-is the most intense experience you can have! I mean, what is more exciting and more extreme than being 10 yards away from a 1,000-pound bull elk and killing it with an arrow? And guess what else? It’s ecologically perfect. It’s pure, the recycling of an endlessly renewable, nonpolluting resource. It’s how the world was meant to work.

But we’ve all been indoctrinated to apologize for what we do. We won’t show how we skin out an animal on the Outdoor Channel. We’re afraid. We don’t want to upset anyone. And let me give you a news flash: The only ones you’re going to offend are the stoned-out hippies from Greenpeace. And if we’re worried about them, we’re done. Which, incidentally, is why we’re almost done now.

TN: You know what else really pisses me off? The key issue on recruitment is that it starts at the retail level. And, somehow, we’ve got to get rid of the old-boy network that too often is not only not welcoming but is positively hostile to new blood. I do a radio show where I celebrate the joys of bull’s-eyes and blowing up water-filled milk jugs with high-velocity rounds. And women call up and say, ‘Jeez, that sounds cool, but I’ve never shot.’ So I tell them to go to a gun shop. And they call back and say, ‘I went to five places and couldn’t find one where the moron behind the counter was nice to me.’ Can you believe that? Now, only the guilty need feel guilty. We’ve got to get those guys out of the sport, plain and simple. But the industry doesn’t even tackle it, much less condemn it. A hygiene-challenged Bubba chases a woman out with some stupid remark about how they don’t sell pink pistols, and we lose another convert. I tell you, there’s this cannibalism in our sport that we’ve got to stop. You take a kid to a gun shop, let him fondle the hardware and deal with a friendly guy behind the counter, you’ve got him for life. That’s what we should be doing.

For information about the Ted Nugent Kamp for Kids, go to www.tnkfk.com