Dove Hunting: Have the Perfect Opening Day This Fall

Photo by Dusan Smetana They come so fast I can’t keep track. Birds to left and right, birds overhead, birds... 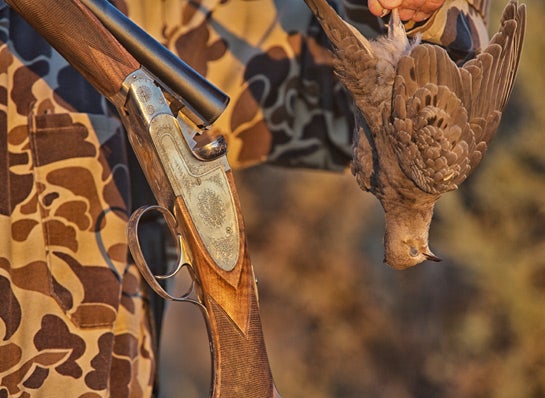 They come so fast I can’t keep track. Birds to left and right, birds overhead, birds from behind, all at once, from everywhere, going and coming and crossing both ways. It isn’t always like this, but there is nothing quite like it when doves find the field.

I shoulder the shotgun and pull the trigger twice. The bird streaks across blue sky like a gray meteor plummeting to earth, falling deep into the standing corn. That one’s down hard. Draw a line from my 5-gallon bucket to that tall pine sticking up from the oaks on the field edge and it’s right there, maybe 60 yards out. I let my eyes linger on the landmark, burning it into my brain. I have a second dove down to the left—another straight line to a dead snag over the pond dam where the bird should be just inside the tall grass, right by the fence post. The third bird, I see it on the ground, still and gray, a single feather caught in a cornstalk to mark its fall.

You’ve been there. You and your buddies, your brothers, and your kids. Khaki shorts and camo T-shirts. Half-trained retrievers and someone’s house Lab running around the field.

Those are the shared elements of just about any good opening-day dove hunt, but from there, it’s all over the map. Your field of September dreams might be a 5-acre hilltop patch or a rolling plain of cut grain with hardly a tree in sight. What doesn’t change is the magic that happens when the doves find the field and the opening bell rings. Shotgun blasts, dog whistles, and buddies crying out: Over your head! Coming from behind! Low bird! Low bird!

Man, there was a time I couldn’t sleep the week before the dove opener. All through college and for years afterward, my opening-day hunts took place on the old Burke Farm. We showed up hours early for the noon opener to claim our spots. (Doves don’t just pour willy-nilly into a field. They follow well-established flyways, cueing in to landmarks that can be pretty easy to figure out—gaps in a treeline, tall pines by a pond. Posting up along these flyways can make the difference between a ho-hum, half-box hunt and a barrel-melting, 60-minute-limit dove shoot.) Claiming a spot was as simple as stamping down a few tall weeds and tossing your dove stool into the brush, but show up much past 10 a.m. and all the good spots were taken.

What happened next happens every September. The midday hours were slow, and we’d mosey around the fields to check in with high school buddies and old family friends we hadn’t seen since who knows when. By late afternoon, most years, the birds would kick into high gear. As they careened into the field, it was like watching footage from old wars, the skies blotted out with bursts of flak smoke where you could hardly believe a plane could make it through all of that shrapnel. Doves slipped through the defenses, dodging a dozen shots from half a dozen shotguns, and exited the field missing a tail feather or three. But not all made it through. Some years the limits came too easily, and it was over before anyone wanted it to be. Other years we were still scratching birds down in a red sunset sky. Always different. But always the same.

Afterward the younger boys—meaning anyone under 40—cleaned birds in a giant, communal wad of feathers, cut wings, and breasts red as berries. We filed into R.B. Smith’s cabin kitchen and dumped the birds into vats of simmering “dip,” the vinegar-pepper sauce that makes North Carolina barbecue famous. We’d go through hundreds of doves. There were steaks if you’d rather, baked potatoes, and then the crowning glory—banana pudding on platters that seemed to measure by the acre.

It wasn’t a hunt. It was a pageant, choreographed by years of tradition. That’s why we were there, despite sweltering heat. To be honest, we’ve all had better dove shoots than many opening-day hunts. But none are seasoned with so much anticipation and full of so much promise—not just of that day’s shooting but of the many hunts to follow.

That’s because opening day of dove season is opening day of everything. From here on out it’s one big parade of late-night packing, Technicolor sunrises, and biscuits in a dark truck. After doves come deer and duck and quail and elk and moose and squirrel and goose. Every one a new chapter. Every one its own magical world. And best of all, every one is coming up fast.

From here on out. But right now, here come the doves. Birds to the left and right. Birds overhead. Birds from behind. They’re everywhere. A farmfield and a September day. There’s nowhere else I’d rather be.