The 110th Meridian plots the path for one epic waterfowl adventure. Start your hunt near Pierre, S.D. The Missouri River... 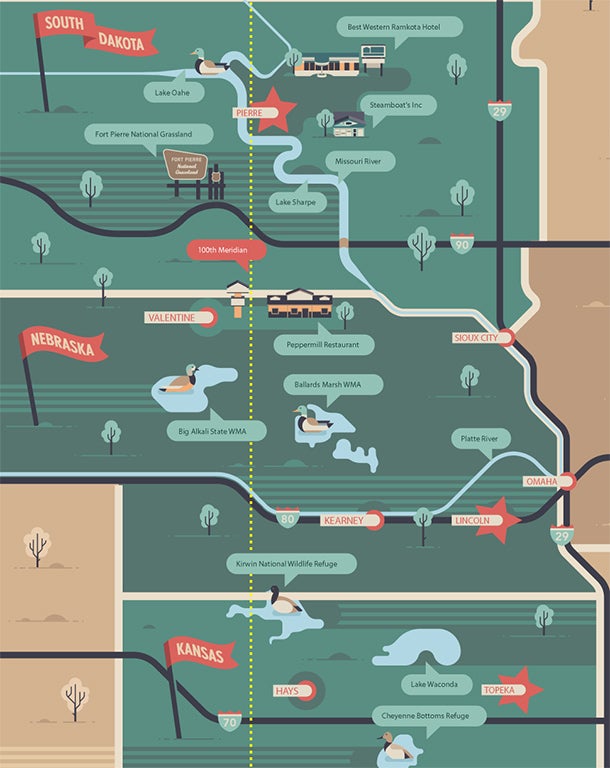 The 110th Meridian plots the path for one epic waterfowl adventure.

Start your hunt near Pierre, S.D. The Missouri River runs roughly parallel to the 100th Meridian before making a bend below Lake Oahe. The stretch from here to Lake Sharpe is lined with game production areas, which are open to waterfowl hunting. There are also thousands of potholes in the region, including enough on the Fort Pierre National Grassland to keep you busy for a day or two.

Tips for Town
Sleep at the Ramkota, which caters to waterfowlers and their four-legged partners. Just a few blocks away, Steamboat’s (steamboatgf.com) will pluck, smoke, and vacuum-seal your ducks for $9 per bird.

Sweet Valentine
Go south to Valentine, Neb. While you’re in town, fuel the truck and load up on calories with the prime rib at the Peppermill. There are a few hunter-friendly motels here, but the self-sufficient hunter should camp closer to his quarry at either Big Alkali or Ballards Marsh WMA.

Water Water Everywhere
The Sandhills include tons of ponds and lakes that range from less than an acre in size to several thousand, giving the ducks plenty of places to loaf. Hop from hole to hole. The water here is shallow–most ponds are just a few feet deep–and prone to freezing up early. When this happens, throw out a dozen blocks and a spinning-wing decoy on one of the larger lakes.

Moving On
Ducks that make it past the Platte River funnel into central Kansas, where they raft up on Kirwin National Wildlife Refuge and nearby Lake Waconda. Farther south, Cheyenne Bottoms is a perennial honey hole. All of this big water attracts divers in droves, offering the best chance on the Great Plains to fill a strap with a bull canvasback, redhead, and scaup–especially for those towing a boat blind.