Illustration by Tim Bower Man, it was cold–14 degrees when I turned off the truck–and as Jack and I dragged... 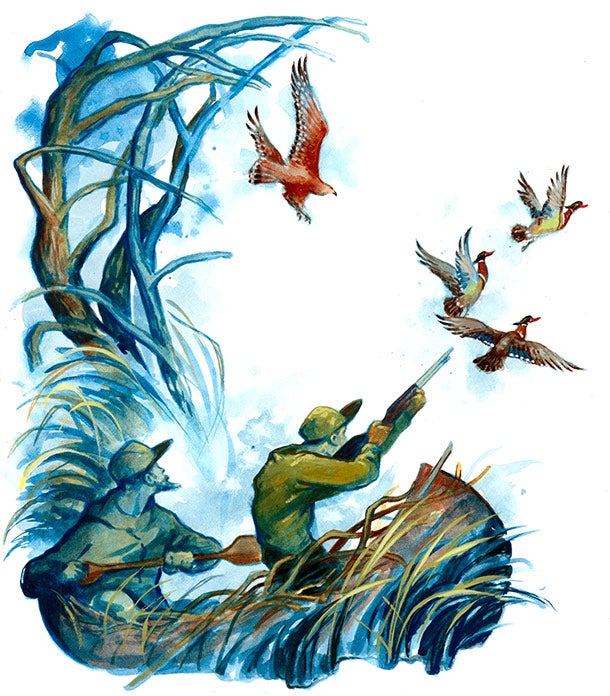 Man, it was cold–14 degrees when I turned off the truck–and as Jack and I dragged the canoe across frozen mud, fangs of hoarfrost scraped the bottom with a ghoulish shriek. We warmed ourselves by cutting river cane and holly, shivering as the morning sun steamed the ice in the slack water by the creek bank. Wood ducks whistled overhead. They’d been pushed out of the beaver swamps where the overnight freeze had surely locked up every inch of open water. This morning, the ducks would have to go to the creek. Which is exactly what we wanted.

Jack had been begging to float hunt for the last couple of years, but I wasn’t comfortable with the idea until now. I wait for the rawest, coldest mornings of January to hunt by canoe, and even though I carry spare clothing, hot drinks, and six ways to start a fire, Jack needed to be a bit older before I’d put him in a boat on a frigid winter morning.

I also knew what Jack couldn’t yet fathom: There is nothing simple about shooting ducks from a canoe. A brushed-up boat is heavy and unwieldy. Sunlight glinting on a paddle blade will flush birds a football field away. Slip into range, and you still have to make the shot. Bundled up in heavy layers, parka topped with a life jacket, legs folded in the canoe bow, cut brush in your face–there’s a lot working against a gunner in a duck canoe. You can’t stand. You can’t pivot. It’s not as easy as you think.

Ducks Right and Left
The creek unspooled through winter-bare trees, the sun gold on gray trunks. I could read Jack’s mind like a book. We all have our sporting fantasies, our visions of what a long-dreamed-for hunting or fishing trip will be. Sometimes the reality lives up to the pictures in our head. Other times, the buck never shows, or the birds never fly. Learning to appreciate whatever the sunrise brings is a journey in itself, and one that can be as crooked as a swamp creek.

This trip, however, seemed to be the lucky strike. Seventy-five yards from the launch, we were into ducks. “One o’clock, Jack,” I whispered. He nodded. But neither of us was really ready. We didn’t expect birds so soon, and I hadn’t yet fine-tuned the camouflage to hide the paddle’s movement. Six wood ducks flushed wild, on the edge of range. Jack emptied his gun. Nothing fell.

“Tough shot, bud,” I said. “If you need to clear some of that brush, that’d be all right.”

I eased the boat downstream.

For the next three hours we bumped birds right and left. Jack rarely had an easy shot. The birds flushed wild or far to one side where he couldn’t swing. Shot by shot his frustration mounted, and I cringed as I realized what was happening. Each fresh chance was freighted with the last few years’ worth of dreams and anticipation, but each missed shot chipped away at the picture-perfect hunt he’d imagined for so long. He never complained, but the hours were taking their toll. Empty red shotgun hulls rolled around in the canoe, like tattered little remnants of confidence.

Late in the morning, we rounded a bend just as a screeching hawk lit on a low, dead tree branch, maybe 60 yards downstream. I pulled up binoculars–the hawk had pinned three wood ducks under creek-bank brush. Jack slowly swiveled his head and cut his eyes to meet mine. I held up three fingers.

These birds were caught between a rock and a hard place. Our big floating pile of brush made them nervous, but they didn’t dare leave the cover. The ducks darted from one side of their sanctuary to the other. At 35 yards away, they could take it no longer. The woodies made a break for it, boiling out of the brush, squealing, wing tips frothing the water. The hawk leapt from its perch, talons extended. I braced the boat with a paddle flat to the water just as Jack swung on the ducks.

The next few moments hung in the air. Jack watched down the end of his barrel, dumbfounded, as the ducks flew away. He couldn’t feel my heart breaking.

It seemed like the last straw. Slumped in the bow of the canoe, he stared at the shotgun in his hands and shook his head. Sitting behind him, I could see in the set of his shoulders how he was taking the cold, hard lessons of a winter creek. For a moment I thought I might have brought him here too early. Too young. And I knew this: At the moment, it wouldn’t do him any good to hear my fatherly insights, to tell him how many empty holes I’ve punched in a sky full of feathers. “That’s O.K., bud,” I said. “Load up. There’s more down there.”

The words seemed hollow and felt like a meager offering. I planted the paddle and drew it back, moving the canoe toward the inside of the next bend. I was about to tell Jack to shake it off, to stay in the game. I was about to offer up some other empty platitude when he suddenly sat up in the canoe, chin forward, eyes on the river. He broke off a sprig of holly to open up his swing, and gave a firm nod.

One day we’ll talk about that moment. I suspect that Jack will remember the rest of the morning more vividly than I will, with the hot venison stew on a sandbar, ducks that held so tight in the brush that they flushed 10 feet from the boat, and the time he put it all together–the squirrelly canoe, the off-balance swing, the pull of a trigger, and the splash of his first float duck in the water.

But I’ll remember the exact shape of my son in the bow of the canoe–framed in brush, silhouetted in the sun, determined. This is not the time, but I’ll tell him one day how proud I was when he let go of disappointment, gripped his gun, and squared his shoulders to whatever the creek would bring.