Illustration by Mike Sudal During the waterfowl season, ducks favor refuge—and for puddle ducks, that often means a puddle, where... 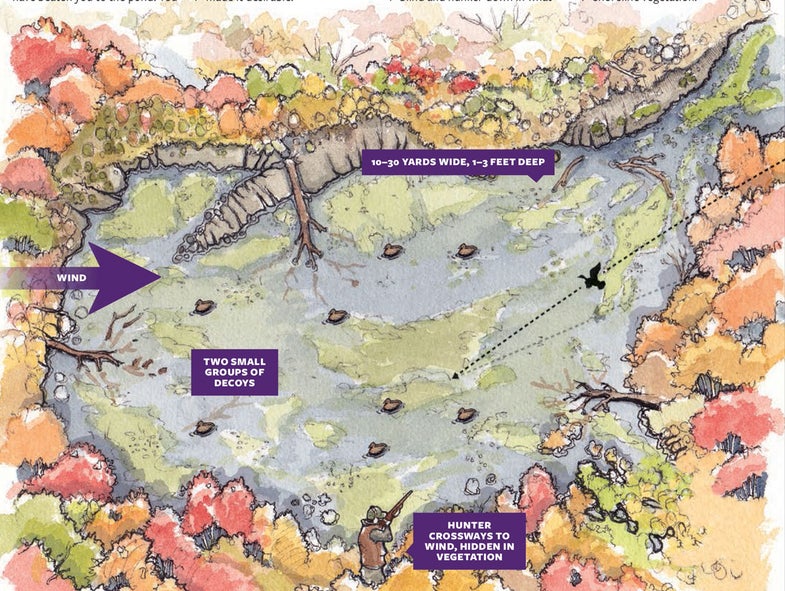 During the waterfowl season, ducks favor refuge—and for puddle ducks, that often means a puddle, where they can chow down on duckweed, pondweed, and smartweed in relative peace and quiet.

Sometimes the puddle is nothing more than a slowing or widen­ing of a stream that seeps into a field. It could even be a knee-deep drainage ditch or a beaver pond. Mallards, teal, and other dabblers don’t need much in the way of water; they’re called puddle ducks for a reason.

Place and Time
Scout before you hunt. Puddles close to big public marshes often have ducks. Note the time of day the birds show up, where they land, and the general spot they prefer in the puddle. Those three elements offer a template for your arrival and the placement of your decoys.

But let’s say you arrive the next day with decoys in tow and face painted and ready, but the ducks have beaten you to the pond. You have a choice: Jump them and take a shot, or flush them without shooting and hope they come back.

Just a few birds around? Sneak up and take a crack at them. But if there’s a dozen or more, flush them without shooting (as hard as that may be). There’s little future in educating all the ducks in the area. Without gunfire, they will probably be back in twos and threes. After all, something about the place made it desirable.

Spread and Hide
Setting decoys is a minimalist operation when you’re hunting puddles. You aren’t trying to pull in ducks so much as suggest the coast is clear to ducks that already want to be here. Place decoys in the area that the real ducks used when you scouted the pond. Leave a landing hole between two groups of blocks. Six to eight decoys is plenty.

Use the call sparingly. Forget the blind and hunker down in whatever shoreline cover you can find, with some camouflage netting, if necessary.

Ducks land into the wind, so position yourself with the breeze blowing crossways to your location—and not off your back. You want the birds looking at empty brush on their final swing into the puddle. Nothing flares puddlers quicker than a pair or two of beady white eyes looking out from behind the shoreline vegetation.