★ The muley bucks are standing at the head of a coulee when we see them through a spotting scope.... 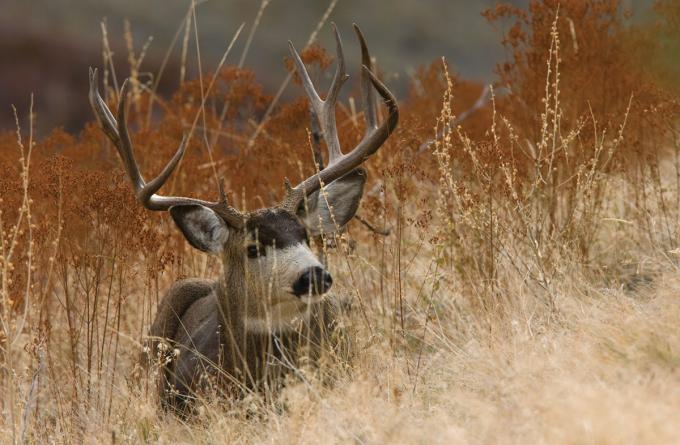 ★ The muley bucks are standing at the head of a coulee when we see them through a spotting scope. When they disappear over the rim, Miles Fedinec grabs his bow and pack. “A mule deer is predictable in the midmorning,” says Fedinec, a Colorado outfitter who’s guided hunters on a thousand-plus mule deer stalks. “They’ll bed once, get up, reposition, and bed again. They’re trying to get out of the sun or get a better wind, or just get more comfortable. They might move a few feet or 50 yards. Regardless, if he moves to that second bed during your stalk, it can ruin the whole thing. So I don’t plan anything until I see them bed a second time.”

Fedinec and I slip to within 200 yards of the deer and watch them bed the first time. Sure enough, they stand up 30 minutes later, ease into a tiny grove of trees 40 yards away, and disappear.

Ultimately, that grove of trees keeps us from pinpointing exactly where the bucks are lying; we slip to within 50 yards of it, and when Fedinec gets his opportunity, it is a fleeting one at a buck that is about to bolt. His arrow sails just over the deer’s back.

★ Today’s big-game arrows barely resemble the clunky shafts I started with 40 years ago. Nearly extinct are the aluminum telephone poles that once sprouted from quivers, replaced by narrow-diameter carbon darning needles that look as if they’d barely survive a 3D target. But don’t be fooled. These slim beauties are supertough, and faster and more accurate than their predecessors. Here’s a look at one fine example: the Vap from Victory Archery ­(victory​­archery.com). —S.B.

3. Shaft
Our own tests show that micro-diameter shafts (this one is .166 inch) pene­trate significantly better than standard shafts—perfect for pushing through large, tough animals.

4. Spine Alignment
Some shooters believe that fletching to spine results in better accuracy. The Vap is spine-tested and fletched accordingly at the factory.

5. Fletching
With a mechanical head, Blazer-type vanes are durable and still provide plenty of stabilization in flight.

Weight
For big game, go with a comparatively heavy arrow, which retains more energy downrange and penetrates better. Between 8 and 11 grains per inch is best; this one is 8.7.