Open Letter. To: The Hunter Who Just Shot a State-Record Buck

The experience of killing a trophy deer has been ­forever changed from the good ol’ days. 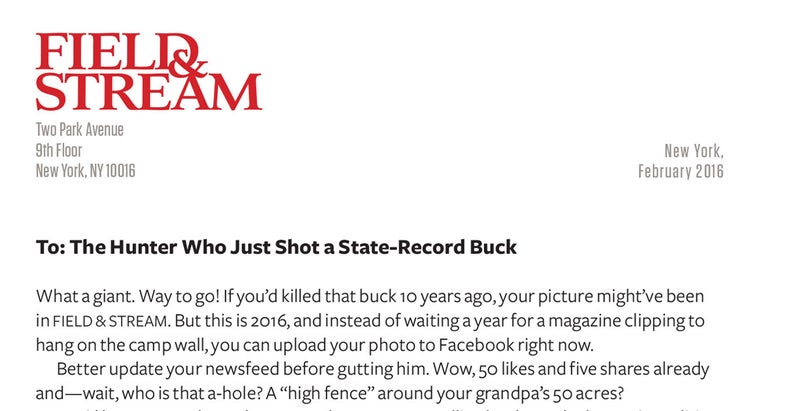 To: The Hunter Who Just Shot a State-Record Buck

What a giant. Way to go! If you’d killed that buck 10 years ago, your picture might’ve been in Field & Stream. But this is 2016, and instead of waiting a year for a magazine clipping to hang on the camp wall, you can upload your photo to Facebook right now.

Better update your newsfeed before gutting him. Wow, 50 likes and five shares already and—wait, who is that a-hole? A “high fence” around your grandpa’s 50 acres?

You’d better post the real story, not because storytelling has been the hunter’s tradition since the Pleistocene, but because you’ll be reading about how you poached the buck in a dozen different states by sunset otherwise.

Just don’t mention the corn pile. Yes, it’s perfectly legal in your state, but it reminds people from states that have outlawed baiting that they want it outlawed for you, too. Maybe leave the crossbow out of the photo. “Real” hunters don’t use them. In fact, they don’t use scents or optics, sit in treestands, carry flashlights, wear camouflage, or hunt on private land, either.

Know your buck’s age. If he’s only 31⁄2, like Milo Hanson’s dink, he’s reached just 75 percent of his potential, and would’ve been “a good one” next year. Also make sure you post something about your history with the buck, since there’s no room for luck in the 2016 deer woods. Even revisionist history—maybe you saw a big rub in there last year—is better than none.

Expect your phone to ring a lot over the next few days. Outdoor writers and wardens will want more details. And tell your grandfather to expect some calls, too. Maybe he told you he’d always keep the farm in the family, but he’s probably never been offered $5K an acre before.

In the end, you’ve really got only a couple of good choices. You can keep your trophy to yourself and your buddies. Or you can share the real story, not give a damn what the haters say, and hope that the rest of your fellow deer hunters will have your back.

And be proud. You did just kill a state-record buck, after all.