Train your pup to fetch dummies, so when fall comes, birds are no big deal. 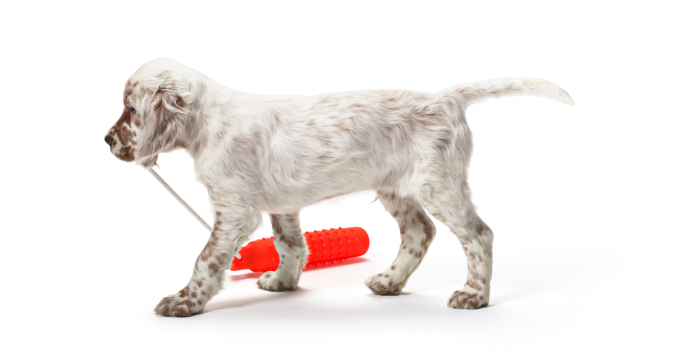 This is really a combination of two commands—fetch and give—and ensures that your pup will retrieve birds and release them in one piece and without a fight. Start by letting him hold a small dummy or bird wing. Walk away with the check cord and call him to you. Next, throw it a short distance, and say “fetch” as he goes to get it. Playing fetch like this can go a long way toward getting results, but most dogs also need to be force-trained.

For this, put Pup on a training table and start by placing a glove on one hand and the dog’s ear in the other. Pinch the ear, not hard, but enough to cause a little discomfort while you start to put the gloved hand in his mouth. When the dog accepts your hand, release the ear and say, “fetch.” The dog learns to make the discomfort go away by taking the hand (and later a dowel or dummy) into his mouth. Hold it there for a few seconds. When you begin to pull your hand out, the dog will open his mouth (because he doesn’t like having it in there). As he does so, say “give.”

Next, use a 1-inch wooden dowel instead of your hand. If the dog won’t let go of the dowel, twist it out, or push it back farther and he will release. Don’t get into a tug-of-war. Gradually hold the dowel farther away so Pup reaches to take it when you say “fetch.” Put it on the table so he picks it up, holds it, and gives on command. Then move to ground level. This may throw your pup, so expect some review. Finally, put it all together. Throw a bird. Say “fetch,” and when he brings it back, say “give.” When he gives, heap praise. By now, that first fall season is probably only weeks away—and your new partner is ready.

Be sure to check out our full guide on how to train a pup to be your new hunting buddy.