It took Martin Martinson and his wife, Tish, 11 years to draw a trophy elk tag for central Saskatchewan. And... 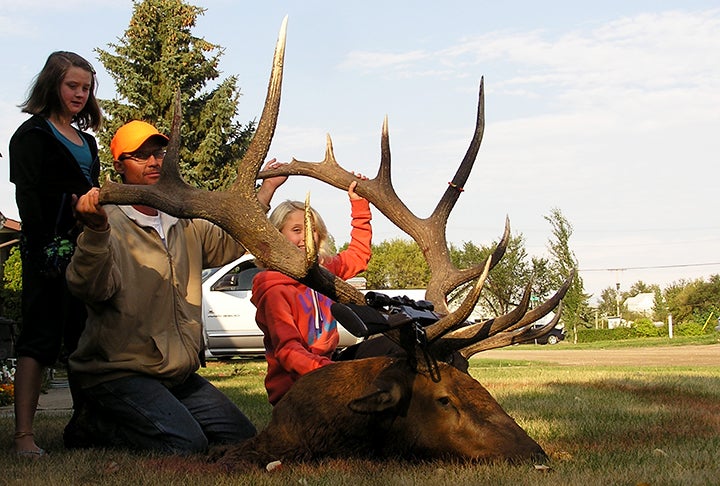 It took Martin Martinson and his wife, Tish, 11 years to draw a trophy elk tag for central Saskatchewan. And when the long-awaited opportunity finally came, the Canadian couple made the most of it, tagging a 400-inch bull that will take the top spot in the provincial record book.

Martinson is a dedicated whitetail hunter, and when he learned in June that he and Tish had drawn tags for the September season, he immediately recalled a spot where 15 years earlier he had surprised a majestic 7×7 while hunting deer. Because his job as a foreman on an oil pipeline keeps him away all summer, he never got a chance to scout the spot. Tish, an elk fanatic who has been Martin’s “hunting soul mate” since they met, handled all the preseason scouting, following tips from the owner of the land on which elk herds had been spotted.

On opening day, they planned to hunt a few miles from Martin’s spot. But when he and Tish set out for the rolling farmland east of their home in Hanely, Saskatchewan, Martin ditched the plan: He turned down a road that led to the spot near Bell Rock where he’d seen the big elk 15 years before.

“It was just a gut feeling,” he says. “The elk always seem to like that spot and it was where I’d seen the biggest bull I’ve ever seen in my life.”

Tish wasn’t so sure.

“When I turned in, the wife started giving me a little heat,” Martin recalls.

He soon caught a brief glimpse of an elk traveling through the hilly farm country, and they parked the truck and hiked half a mile to a vantage point to get a better look. Minutes later they spotted the elk 500 yards away.

On a friend’s recommendation, Martin had bought Hoochie Mama cow calls for Tish and himself.

“She got it out and said, ‘Well, should I give it a try?’ It had to be worth a try, because the bull was traveling away from us. She hit the call and it turned him. I couldn’t believe it.”

Knowing this was his wife’s dream hunt, Martin decided to give her the shot, but Tish’s rifle jammed. Now it was up to Martin to make the shot. With the elk at 300 yards, he lined up the crosshairs.

“The shot went right over his back. Dust rose like the bullet just parted the hair on his back, and the bull turned in full stride and looked right at us. He was about 20 yards from disappearing into a coulee when I made the second shot,” he says.

That shot dropped the big bull in its tracks.

Martin says there was little time to field-judge before shooting. When he and Tish walked up to the bull, “She said, ‘You don’t know what you’ve got here,'” Martin recalls. “She was crazy ecstatic. Still is.”

As for what made him turn down that road on what he calls “that fateful day,” Martin says it was just a hunch, born from that brief encounter with a true monster elk many years earlier.

“It got up 75 yards in front of me in the hoarfrost and jumped a fence with seven cows,” Martinson says. “The beauty of that has been stuck in my brain ever since.”