Our jet descended through the dense clouds toward the community of Norman Wells, and I could see the Mackenzie Mountains... 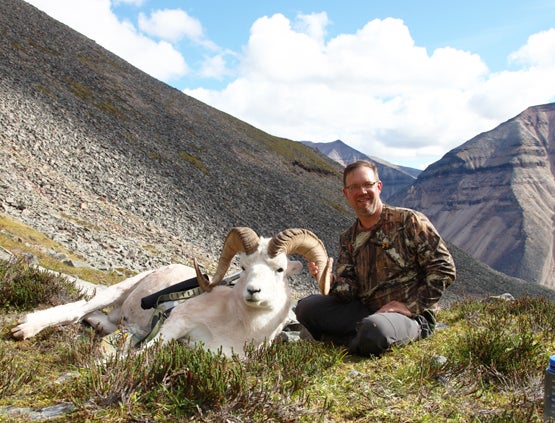 Our jet descended through the dense clouds toward the community of Norman Wells, and I could see the Mackenzie Mountains rising over the western horizon. These mountains are old and weathered and made up of broken rock and steep slopes. At first glance it didn’t appear that there was enough forage to support a grasshopper, but I knew the well-worn game trails crisscrossing this land led to lush, concealed patches of vegetation. In one of those patches I hoped to find my Dall sheep. I had been dreaming of this hunt my whole life.

Before I could even hunt, I remember reading every outdoor magazine I could get my hands on, scouring the glossy pages from cover to cover looking for the stories about the grand white sheep of the Far North. Often I’d read them five or six times, absorbing every detail. To climb in this rugged habitat and stalk a sheep for hours, if not days, is physically exhausting and can wear you down mentally. It is this challenge, however, that makes a Dall ram such a coveted trophy.

Fantasy Camp
I was met in the airport by outfitter Stan Stevens, of Mackenzie Mountain Outfitters, who operates in one of the most rugged and remote areas of the Northwest Territories, offering high-quality backpack hunts. Stevens is a bush pilot who has been outfitting in the northern wilderness for more than 25 years.

From a small airstrip carved out of the northern boreal forest, we took off in Stevens’s Ranger helicopter, getting a bird’s-eye view of the landscape that left me awestruck. The formidable-looking Mackenzie River carved its way through the scrub birch in the valley below, and the rugged outline of the Mackenzie Mountains beckoned our approach. Jagged rocks jutted from mountain faces, each outcrop flanked by tufts of moss, alpine grasses, and low-bush cranberry that left no doubt we were in sheep country. Game trails were cut deep into the land and spread like spiderwebs crisscrossing the alpine.

When we broke around the corner of a long mountain range, I could see camp on the distant shore of the lake below. We touched down softly and were met by an efficient crew that unloaded the gear and got it up to the cabins. I was finally in sheep camp.

Take Your Fancy
Glenda Groat, an aspiring young sheep guide, was assigned to me the next morning for my 10-day hunt. She had guided for several years in camps in the Yukon and Northwest Territories and came highly recommended. Her positive nature struck me immediately and her smile was contagious.

It didn’t take us long to pull together food and gear and ready our pack dog, Obe. Stevens would be dropping us by floatplane in a valley to the northeast that hadn’t been hunted for close to a decade. As we flew over, he pointed out sheep below and tipped the plane to provide a better look through his binoculars. We flew up and down several valleys until Stevens located a lake that he was comfortable landing on. After we coasted to a shoreline littered with caribou and moose tracks, Groat and I unloaded our gear. Seconds later the plane was airborne again and disappearing over a distant ridge.

We wasted no time heading out in search of rams. There are thousands of places in the rugged mountains that will hide sheep, and hiking and glassing is the best way to create opportunity. It sounded easy enough, but I jokingly told Groat that she should write KEEP UP on the bottoms of her boots. Occasionally she’d turn around with a huge grin and give me a thumbs-up to check if everything was O.K.

Caribou trails along the waterways made it easy to navigate. Heading uphill always meant loose rock and having to watch our footing. We stopped to glass some distant white specks and found ewes and lambs working their way up a steep, dark mountain. Groat had an uncanny sense for spotting game and would usually have critters pegged within seconds of their coming into view. We were nearing the top end of the drainage when two rams appeared on the mountain ahead.

The pair was grazing on a long bench of green grass high above us. We crossed the valley to gain some elevation and a better angle. Even from our distance I could see that both were mature through my binoculars. One was old with broomed horns broken off at the points, but the other was larger and younger.

“I don’t even need the spotting scope to see that the bigger ram is legal,” Groat said. “His horns are heavy and sweep clear around. Ooh, he’s fancy, no matter how you look at him.”

From then on, we decided, we would call the ram “Fancy.”

Steep Anticipation
It was too late in the day to even consider trying a stalk. When the sun started to sink over the western mountains, we crossed the valley and looked for a spot to set up our tents for the night. We’d camp directly below the rams and get an early start on an ugly ascent.

In the morning, I was eager to work the stiffness out of my legs. The first 100 yards seemed hard, and I realized why when I turned around to look at our base camp and saw just how steep the mountain was. The large, loose rocks provided no growing medium whatsoever for traction. I used my hiking poles to keep balance, checking the stability of each footstep before advancing. Even Groat was showing more color in her face. We climbed hard for close to five hours before breaking out on the top of the mountain.

From that high, it didn’t take long to determine that the rams had vacated the grazing spot from the day before. We needed to find the sheep before they had a chance to see us, and the only way to ensure that was to drop down and cut around above the meadow where we had expected to find our quarry. Going downhill through the loose rock was harder than climbing up. We finally got to the bench and dropped our packs to sneak to the edge for a look into the next valley. Obe had been with us the entire time, and Groat gave him hand signals to lie down and stay.

Before proceeding, I grabbed my binoculars and muzzleloader–I’d decided to make this hunt with a smokepole to add to the personal challenge. We covered about 100 yards of boulders before the hillside opened up below us. Groat came to a stop, sat down, and pointed to the two rams below. They had moved a long way and looked like little white dots. We belly-crawled a little farther through the rocks to set up the scope and have another look. Fancy appeared even bigger when viewed from above.

I didn’t care if we had to camp on the mountain for days; I’d try to be patient and wait for a window of opportunity. The rams were feeding again, forcing us to stay low in the rocks. It took 45 minutes before they bedded, and both sets of eyes were looking straight up the ridge toward us, pinning us down. The rams stood up after an hour and started feeding again. This time they stayed on their feet for 20 minutes before pawing out new beds and settling in. Only Fancy was facing us.

An hour later, we were wondering if we’d be on the hill all day when Fancy stood up, had a big stretch, and bedded facing down the valley.

“Let’s make our play,” I said. “We don’t know where they could go from here and I think we could crawl right in on top of them if they stay bedded for any length of time.” Groat was as eager as I was to turn our three hours of waiting on the mountain into a high-elevation stalk.

I started down in the lead, crab-crawling through the rocks deliberately. I ranged the sheep at just over 700 yards before tucking my rangefinder back into my shirt pocket. My rifle shot consistent groups at 200 yards, but I might be able to slip even closer if the rams stayed in place. My arms and legs burned as I crawled, picking the path with the least unstable rock. I ranged the sheep again, and this time they came in under 400 yards. Hard to believe it had taken me so long to cover that amount of ground, but looking back up the hill I couldn’t even see the spot where we’d been pinned down. I ranged the rams and a group of rocks down the hill in front of me. If I could reach the rocks, I’d be 200 yards from the sheep. The rangefinder read 240 yards. I quickly gained more ground and was nearing the rocks when the old broomed ram stood up. My heart sank. But he turned away, so I slunk farther down the hill.

I was within spitting distance of my goal when Fancy stood up. I tried to get a rest on the closest rock but it was too steep; I’d have to use a sitting position. In practice I’d made this shot dozens of times. Taking a deep breath, I ranged my ram at 213 yards. I shouldered the muzzleloader and rested my elbows as best I could on my knees. Looking through the scope, I sighted Fancy and placed my finger on the trigger. He was in my crosshairs as he grazed, slowly quartering away from me. My rifle roared. When the mountain breeze wisped away the smoke, I could see the sheep drop his head and slowly fall off his feet.

Fancy had died without even kicking up a hoof, while the old broomed ram just kept grazing beside him.

Groat was already at my side with high fives and a big hug. We checked the ram again through the binoculars and confirmed that he was down. I was completely overwhelmed. There are no words to describe realizing a lifelong dream. I tried to thank Groat but couldn’t get the words out. My eyes filled with tears.

Once I’d regained my composure and thanked Groat, we hiked down to the grand old sheep. His horns kept getting bigger as we neared. When I held them at last, I was elated. We took the rest of the day to bone and cape the ram and pack it back to camp. Obe was thrilled to be back with us and carried more than his share of the meat. That evening in camp, we feasted on sheep tenderloin and a rehydrated backpack dinner. It was like ­dining at a “Fancy” five-star restaurant.