Strap on a pack and sleep in the mountains for adventure and big bulls. 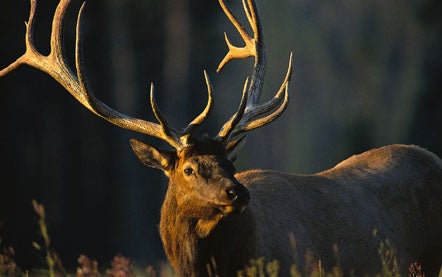 The elk appeared as stick figures, their antlers branching against the light rock of the canyon. They stood where a day hunter’s hopes begin to die, in country that was too steep for the hooves of the horse I didn’t have the money to buy, anyway. I lowered the binoculars. The only way to tag one of those bulls was to carry a backpack into the basin and live with them.

Two days later, after a fitful night below the timberline where coyotes circled my tarp, I found a string of elk filing down a rift in the cliffs. The 5-point trailing the band was heading into winter as fat as a seal, and after the shot echoed off the canyon walls I boned out the loins and stuffed them in my pack, then buried the rest in the snow and set his head in the fork of a tree until I could return. That was nearly a quarter century ago. I’ve had many other successful backpack hunts since then, and it’s only after the elk is on the ground that I sometimes regret never getting around to buying that horse.

The Ultimate Reward
Backpack hunting is tough, but the notion that it’s beyond the abilities of all but the fittest, most experienced outdoorsmen is misleading. It can even save time and energy. When you hunt with a pack, you put in most of your miles the first day. After that, hunting is much less punishing than it would be if you had to climb up from a low-elevation camp every morning. Also, backpacking puts you in the heart of good elk country, not on the outskirts. You’re free to hunt the openings at dawn and dusk, when you’re most likely to find elk, rather than climb half the day to reach prime country and have to turn around to make it down to the road before dark.

Backpacking works because it puts you where the elk live during every available minute of shooting light. As such, success depends less on hunting tactics than it does on the ability to withstand 14-hour nights on cold ground and isolation in the wilderness. It helps to go with a hunting partner, for both safety and companionship. But whether you’re solo or part of a group, backpack hunting is a way of getting lost, in the very best sense of the term. It’s a way of falling out of time and establishing a comfort level with nature that is far more valuable than obtaining a trophy.

The Mountains
What you are looking for in a backpack elk hunt is security cover-thick timber slopes or rugged canyons that are too distant from the road for the weekend warrior and far enough from established pack trails to discourage horse traffic. As a rule of thumb, if you can hike in from a trailhead and reach the places where elk feed and bed before dawn, then leave your pack at home. There’s no sense in setting up a camp where the odors of woodsmoke and humans will drive animals away.

Look for areas on the map that are a couple of miles from established trails and roads, paying attention to smaller, unnamed drainages that require either fording a river or climbing straight up for 1,000 feet or more to reach. Seclusion is more important than ideal habitat. Radio-collar studies indicate that many elk, big bulls in particular, retreat to small areas, sometimes only a few acres in size, where they sit out the season. Those places have one defining characteristic-they’re overlooked by hunters.

**Making Camp **
Most backpack hunters climb until they reach what looks like good country and set up a base camp. While nothing is wrong with this approach, much can be said for hunting under the weight of the pack and sleeping where nightfall finds you, at least until you locate fresh sign. My hunting partner Joe Gutkoski, who at 76 still backpacks for several weeks during both bow and rifle seasons, once tracked a bull for three days, camping beside the beds it had made and killing it in a snowstorm on the fourth morning. If he’d had to return to a base camp, he’d never have shot that elk.

Pitch yourhelter well away from game trails and suspected bedding cover. Camp should be situated with regard to the next morning’s hunt-ideally, a mile or so downwind of openings where there’s the chance of intercepting feeding animals at dawn.

I try not to build fires during the bow season, when elimination of scent is at a premium. However, as the mercury drops and the solstice approaches, there’s not much choice. Building a fire eliminates the necessity of packing a stove for cooking, not a small matter where ounces count. More important, you need fire to dry your kit, and its warmth and cheer are as important as a good book for passing nights that may stretch from five in the evening until seven in the morning. Tarp shelters that reflect the warmth and light of a fire are both lighter and less bulky than most backpacking tents. I use a Whelen lean-to made from clear plastic sheeting (see “The Perfect Shelter,” August 2003). Gutkoski’s spartan camp consists of a plastic tarp draped over a log with one end raised off the ground. A bivouac bag works early in the season.

The golden rule of backpack hunting is to keep it light. A pack that weighs one-quarter of your body weight is about the limit a fit man can comfortably carry. A fifth of body weight is better still, especially if you plan to hunt under the pack.

The Hunt
Take advantage of camping near where elk feed. Dawn should find you skirting the edges of ridge-top parks or small openings in the pines, moving quickly into the wind to cover as much ground as possible while there is a chance of intercepting elk that are slow to retreat to the thickets. The farther you’ve packed in from hunting pressure, the colder the weather, and the deeper the snow, the longer this window of opportunity can last. After severe snowstorms, I’ve killed elk that were still lolling about the parks as late as 10 a.m. Don’t forget your binoculars. You may be able to mark distant elk to hunt on succeeding days (one of the benefits of staying mobile) or spot a line of fresh tracks filing into the timber.

A big advantage to backpack hunting is the freedom to follow a trail wherever the tracks lead, with no need to return to a distant camp. Tracking is the most exciting way to hunt elk, but with several sets of eyes, ears, and nostrils searching for danger, it’s also the most difficult. The key is knowing when to cover country and when to slow down. Typically, elk will begin to meander, poke their noses into the snow to grab mouthfuls of fescue, and turn uphill into thick timber before lying down. When you see these signs, stop for a minute and think. Can you circle to approach the area where you suspect they’ve bedded from above, with the wind in your face? You’ll lose time leaving the tracks, but gaining the element of surprise is often worth that risk.

External Frame Packs offer several advantages: cost, which is less than that of top-line internal frames; weight-bearing capacity, often greater than for internal frames; and the ability to strap on loads that ride high, placing less stress on your back. For hauling meat and packing a spike camp, this is a good choice.

** Internal Frame Packs** are great if you hunt with the pack on, venture off-trail, or climb above timberline. They do not stand as tall or protrude from the body as far as external frames, which catch on branches and brush. Internal frames are not as comfortable for hauling meat loads.

Recommendation: Mystery Ranch Groove, $329 (406-585-1428; www.mysteryranch.com). This pack is built on a highly adjustable frame for an almost custom fit. It doesn’t come in camo, but I have yet to find a pack that equals it in comfort.

Flexible Frame Packs combine polycarbonate skeletons that flex with the movements of your body, and modular pack bags that attach via buckles into slots. Handy but with limited capacity for gear, they’re best suited for early-season hunts two or three days long.

Recommendation: Rocky Mountain Pack Systems Sawtooth, $199 (208-234-4584; www.rockymountainpacks.com). It’s versatile, with both a detachable daypack and beltpack. You can’t haul 100 pounds of meat with it, but then, who’d want to? -K.M.

brush. Internal frames are not as comfortable for hauling meat loads.

Recommendation: Mystery Ranch Groove, $329 (406-585-1428; www.mysteryranch.com). This pack is built on a highly adjustable frame for an almost custom fit. It doesn’t come in camo, but I have yet to find a pack that equals it in comfort.

Flexible Frame Packs combine polycarbonate skeletons that flex with the movements of your body, and modular pack bags that attach via buckles into slots. Handy but with limited capacity for gear, they’re best suited for early-season hunts two or three days long.

Recommendation: Rocky Mountain Pack Systems Sawtooth, $199 (208-234-4584; www.rockymountainpacks.com). It’s versatile, with both a detachable daypack and beltpack. You can’t haul 100 pounds of meat with it, but then, who’d want to? -K.M.