Simple precautions will keep most grizzlies at bay. But what if there's no turning back? 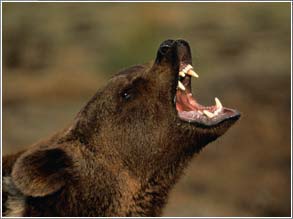 Somewhere in the northern Rockies, sometime this fall, a group of hunters will hike back to where one of them killed an elk the evening before, to pack out the meat and horns and hide. Thinking solely about the job ahead, they will come around the last bend, or crest the last rise, and walk smack into the biggest damn bear they have ever seen in their entire lives, feeding on the elk.

Any number of outcomes could occur in the next few seconds. Among the worst, according to Steven French, M.D. (co-founder with his wife, Marilynn, of the nonprofit Yellowstone Grizzly Foundation), who for 15 years has studied Ursus arctos in the field to research ways of conserving them, is that one more grizzly ends up being shot by hunters who sincerely feared for their lives, whether or not their lives were truly in danger.

Killing a bear may or may not save a human life or prevent injury. What it definitely does, though, is reduce the bear population. The prime causes of grizzly mortality in the Yellowstone ecosystem in recent years have been hunter related, with critical female mortality quotas, established by the U. S. Fish and Wildlife Service, being exceeded for the last three years.

None of this is to suggest that bear attacks are not a real possibility, or that someone facing a charging bear is not facing real danger. It is only to point out the fact that bears suffer disproportionately from encounters with humans, particularly hunters. It is also a fact that hunters, along with fishermen, campers, and hikers, bear, as it were, most of the responsibility for causing bear attacks; and so the responsibility for trying to prevent them must be theirs, too.

Bear, Bear, Anywhere
The most basic way to prevent bear attacks is to avoid encountering bears. While hikers are advised to travel in groups, talk, sing, and clang bells to alert the countryside of their approach, hunters, and most fishermen, are obviously not about to take such measures. They are, instead, going to move as quietly as possible, usually alone, and into the wind so a bear will have no inkling of their presence until they are directly on top of it.

As French, a hunter himself, sees it, the single most essential skill hunters must develop to avoid encountering bears is awareness. This is the sense that a bear could be lying just over the next hill or behind the next tree or in those final 100 yards into camp at last light. Awareness is what enables a hunter, as he stalks an elk or a sheep, not to focus so exclusively on that animal that he is blind to all the signs–such as scat or tracks, a dip ahead in the terrain where a bear could be concealed, magpies clustered in a tree, the scent of decaying meat–that could possibly signal a bear’s presence. As essential as it is for all hunters to develop awareness, it is practically suicidal for bowhunters not to: Besides wearing camouflage that makes it harder for bears to recognize them, bowhunters carry scents and use calls to lure animals in, and their only weapon is one that Indians in bear country abandoned as soon as they were able to obtain even the shoddiest trade guns.

The more aware a hunter is about bears, the more likely he is not only to expect their appearance anywhere at anytime but also to know about precautionary steps he can take to stay clear of them. He might know, for instance, that a rifle shot is nothing more than a dinner bell to many bears, and that a bear can arrive on the scene of a kill at once. Bugling, and other calling, can also attract bears, so a hunter should make sure he can see all around before starting to call.

An aware hunter will try to get a downed animal out of the field as soon as possible. If he has to hang the meat–and hide and horns–he will do so at least 10 feet off the ground, 4 feet away from the tree trunk or supporting pole, and 100 yards from any slping area. If he knows he’ll have to leave the dressed carcass where he shot it for any time, he’ll collect all the viscera on a plastic tarp and drag it as far from the carcass as he reasonably can before dumping the viscera off. (He’ll also keep the guts away from any trails to prevent creating bear problems for other people.) Before leaving the carcass, he will strip off his sweaty undershirt and tie it to the animal, the crusty human odor likely to keep most sensible bears at bay.

An aware hunter, when he returns for his animal, will come in from upwind and find a spot from which he can observe the carcass at a safe distance before walking up to it. If he does find a bear on the carcass, he may consider letting the bear see him, and hope the bear retreats; or he may just have to wish the bear a silent bon appetit! and quietly retreat himself. Trying to haze a grizzly off a carcass is a hardly unprecarious course of action.

The Confrontation
Because bears are highly intelligent, temperamental wild animals, they are far from predictable; so a hunter can be extremely aware, do everything right, and still find himself suddenly confronting a startlingly huge grizzly–there are no effectively small bears, of any species. In this circumstance a hunter must first make sure the bear recognizes him as a human, people not being among bears’ prey. Running or crouching are likely to draw a bear closer, to better identify what kind of animal it is seeing. A hunter partially obscured by brush should step clear, so a bear can see his complete outline, raise his arms at his sides to enlarge his image, begin speaking to the bear in a soft, calm, firm voice, and not make eye contact.

Some people advocate aggression, “to act like a wolverine and go at” a bear, even to the point of shouting and chunking rocks at it! Aggressive behavior may drive off sub-adult grizzlies (if a hunter is good enough to judge age classes), most black bears (although my only attempt at scaring off a sow black bear left me very far up a tree for a very long time, at night), and even some full-grown grizzlies. As a rule, though, trying to intimidate a mature boar or, worse, sow grizzly with cubs is like playing chicken against a Peterbilt. Better to speak softly and back slowly away.

If a hunter does face a charge–and nobody really wants to hear this–he should stand his ground. (If there happens to be a tall tree he can jump right up in, fine; but black bears, and more grizzlies than most people imagine, climb.) By far, most charges are bluffs, particularly if they end in a bear’s standing on its hind legs. French reports having grizzlies charge close enough “to shake hands” with, but by staying put and not running he has yet to be bitten or clawed.

That being said, there are nonetheless bears that will complete an attack. French and others believe, though, that a bear will use only the force necessary to neutralize a perceived threat. Unfortunately, this force is measured in bear-units of energy: A swat that wouldn’t seriously injure another bear can leave a human face in tatters. If an attack looks certain (and the deterrents described in the sidebar have failed), a hunter should clamp his hands behind his neck and tuck up in a fetal position with elbows and knees on the ground. This should minimize injuries and restrict them to the meatier portions of the body. (A hunter wearing a backpack or daypack should keep it on for added protection.)

A “mauling” lasts only seconds; it just seems to go on for days. Afterward, a hunter should remain still until he is sure the bear has gone away. If an attack actually does extend beyond an initial series of blows and bites, particularly if he is down and not moving, all bets are off and a hunter should fight like hell! (Any physical attack by a black bear should be resisted immediately.)

Nobody can truly ask anyone else even to consider the possibility of letting a bear injure him in lieu of shooting it; but we can reconsider our perception of the “killer bear,” at least a little bit. Bears are one of the risks we accept when we choose to hunt many wilderness areas. If we wanted a wild completely free of the risk of bears, we could have that all too easily.

The only problem is, it simply wouldn’t be the wild anymore.dy can truly ask anyone else even to consider the possibility of letting a bear injure him in lieu of shooting it; but we can reconsider our perception of the “killer bear,” at least a little bit. Bears are one of the risks we accept when we choose to hunt many wilderness areas. If we wanted a wild completely free of the risk of bears, we could have that all too easily.

The only problem is, it simply wouldn’t be the wild anymore.