When you're face to face with death, time stands still. 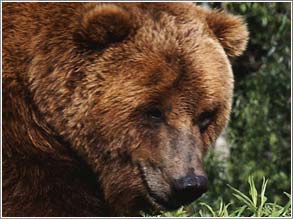 It was a gloomy morning in late September. The mountaintops of Chichagof Island were lost in fog, and shreds of mist clung to the giant hemlocks and spruces on the lower slopes. I hitched up my packboard and pushed through the chilly gray shadows of the deep timber along the trail I’d kept blazed through the years. Vern Clemons and Ree Reindeau followed. Not far ahead disaster waited.

Two hundred yards in from the shoreline I swung around a brush patch to the first open muskeg. There wasn’t any warning. Right in front of me were three brown bears, the biggest and most dangerous predators in all the world. Two of the great beasts snorted as they crashed out of sight in the Southeastern Alaska jungle of tangled evergreens and devil’s club. They didn’t go very far. I could still hear them moaning and coughing their threats. But it was the other bear that told me I was in bad trouble. Not 20 paces away, it had swung around to face me, its heavy lips wrinkled back to show its teeth. The slung rifle came sliding off my shoulder and I yanked the bolt to jack a cartridge into the firing chamber. I heard my voice sounding a warning to Vern and Ree. But they were too far back to spot the bears.

The bear turned its head away for a short second, its eyes following the movement of the other two bears, its ears fanned to catch the sound of their excited scuffling. I hoped that this bear would now follow the others out of sight, but instead, foam started bubbling from its jaws, and its teeth began clicking like castanets. Vern and Ree were just coming around the alder thicket when the bear buttoned its ears flat against its enormous skull and came roaring into its attack.

As the animal closed the short gap between us with an incredible burst of speed, the thought flashed through my mind that there’d be time for just one shot, almost at the same moment the bear would crash into me. My chances didn’t look very good. One swipe from the heavy paw of a Sitka brown bear could break the neck of a bull moose. For me, this would end quick. Where the 220-grain bullet from my .30/06 hit I’ll never know. I pulled the trigger, and then there was just time to do the thing that kept me among the living — to pivot away from the onrushing monster, dive headfirst into the spongy muskeg, and clamp both arms around the back of my neck. Instantly the weighty bulk of the bear was on me, batting with its hooked claws while its fangs slashed deep for the vulnerable spot where spine and skull come together.

Strangely, I have no recollection of being hurt as the bear’s teeth bit into my arm and all but jerked it loose at the socket. Moving with speed faster than any man could match, she crushed her long fangs into my shoulder, lifted me, and whacked me against the muskeg. And still there was no sensation of pain. I don’t know how to explain it; maybe it was shock. I seemed to be fully conscious as I fought for my life in the only way I stood a chance: letting myself go limp by managing to twist about and remaining stomach down. A hand flew past my eyes, gushing blood like a leaky hose, and I clasped it at the back of my neck again while I rooted desperately into the damp moss. I knew I must not permit the bear to flip me belly up where it could rake out my guts with a single scoop of its meat-hook claws. My one chance was to feign death and at the same time try to shield my vital parts. Though I realized I might pass out at any time, I felt only an odd sort of numb detachment — almost as if this macabre experience were happening to someone else. And then the bear took my entire head into her mouth.

She had been shoving me farther into the soft muskeg, her jaws pressing hard against the back of my skull, and then her teeth clamped together and I was flung into the air like a rag doll. I expected my neck to snap and was totally helpless to do anything about it.

My time must have been on the very edgge of running out when suddenly, in a display of popping stars, there came a violent explosion. Everything seemed to let go, and my head was flung from the bear’s mouth. When I opened my eyes, all I could see at first was red. My hands looked like paintbrushes dipped in crimson. I felt warm blood streaming down my face and welling up from my neck and shoulders and chest. I was sprawled among uprooted clods of moss and meadow grass, drenched in my own gore. I turned my head. Beside me on the muskeg the brown hulk of the killer bear heaved in dying convulsions. I managed to raise myself on one elbow just as Ree shoved the muzzle of his rifle against the shaggy head alongside my own and pulled the trigger quickly. There was a blast of bloody spray against my face, a shudder, and a long sigh. The bear was dead.

Vern, who had saved my life by shooting the beast off me a few seconds earlier, now dropped to his knees beside me, and I read the horror of my appearance in his eyes. This had been his first Alaska hunt, and I had turned it into a nightmare for him. I’d planned to show him my secretly blazed trail to a meadow at timberline where the blacktail bucks fed themselves hog fat in the fall. It was deer that Vern wanted; not charging bears and a dying man.

With a combination of hard work and luck, Vern and Ree managed to get me to a floatplane, which got me to a hospital in Juneau only a little less than two hours after Vern’s cool shooting blasted the bear off my neck. Four more hours on the operating table got me cleaned up and sewed together enough to start the blood transfusions that pulled me through.

And how long had it taken the bear to inflict all that damage? Less than 30 seconds, Vern and Ree agreed. At that rate, I couldn’t have survived a minute under the bear’s teeth and claws.