Seeing the Familiar For the First Time

Whether unusual, or ordinary, hunting pronghorns is always meaningful 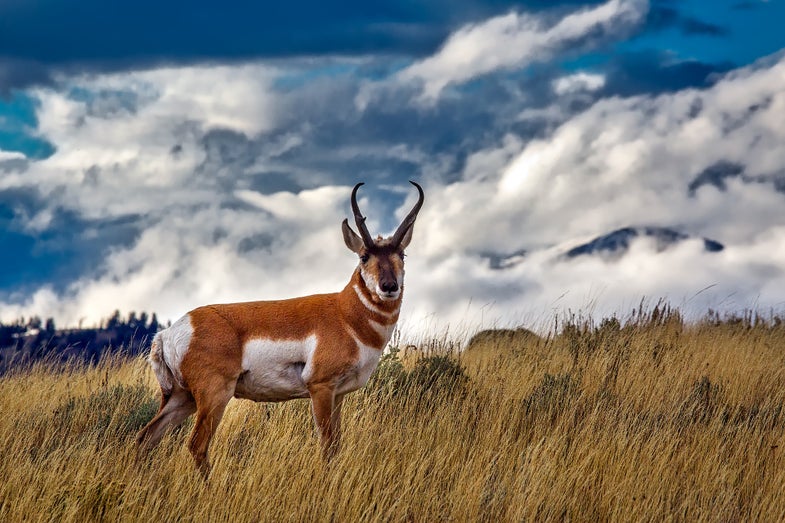 When I was a suburbanite born, raised, and aged on the outskirts of a Pacific Rim metropolis, I saw things as a suburbanite. To me, then, hunting was an extraordinary undertaking that only became credible after long, sometimes tortuous journeys to what were seemingly exotic locales, exotic if for no other reason than the thinness of their human populations, compared to home. It was not until, rather late in life, when I moved to one of those exotic locales that my hunting began to become, in the words of novelist Thomas McGuane, “less and less expeditionary.”

I now realize, though, that the nearness and very ordinariness of hunting in my new home led me, with my lingering suburbanite’s point of view, to see it as something not only unexceptional, but not entirely serious, as well. It was almost understandable, in a way, especially if you took pronghorn hunting as an example.

Despite entrenched fantasies of picturesque Western vistas, game is where you see it, and last year my poet-bookseller-goatherd-cheesemaker friend Dainis showed me the antelope on his prime hunting grounds on public land in the semiarid heart of my home state. Instead of some classically unbroken prairie where the skies were not cloudy all day, the land was filled with rumbling Terex earth haulers carting ore from the uranium mines. The terrain was cobbled up with tailings, landfills, and fenced-off sections bearing signs warning of the irradiated consequences of trespass. Crickets bobbed monotonously, pumping crude, while gas wells started methane on its way to Chicago and cattle wandered among the greasewood. All in all, a panorama likely to inspire little awe and fewer ballads.

Still, the tall mesas and Native American petroglyphs, sage and sage grouse, mule deer and pronghorns, and Dainis’ secret dry campsite tucked in a grassy gap between stony ridges and in a patch of ancient junipers and limber pines, where the northern lights were visible at night and where no one else had set foot since Dainis camped there the year before-all that should have shown me something of the grave beauty Dainis’ eye managed to catch. Yet even though it was a couple hundred miles from our homes, the site seemed, at first, no more striking and no farther away to me than a backyard campout compared with the interstate hunts of my past. And because the hunt’s apparent homeliness made it seem somehow less serious, I had brought what I considered my somewhat less-serious rifle.

I have no-nonsense rifles I carry for their cold efficiency, and others because they happen to strike my fancy. Now I had with me a Browning Model 78 single-shot, High Wall .45/70 with a crescent steel buttplate and buckhorn sights. Over the years I’d used it to take whitetails, black bears, wild boars, even alligators and buffalo, but I still thought of it as a casual option, an adequate 100-yard rifle for this local hunt. After all, I wouldn’t be hunting for a head but just a doe to put in the freezer. That’s the way I saw it, anyway.

Two or three good hours of light remained in the day after we got the tent up, and Dainis and I headed out in his old Blazer to wander the two-track trails to acquaint me with the territory and to glass for pronghorns. Several times we spotted small bands off in the sage, too far to shoot and too hard to stalk, at least on the first day.

In the late afternoon, a dozen or so antelope crossed in front of us and jogged out into a big flat. The band’s alpha buck took it into his head, then, to run off a potential usurper, the two animals raising golden trails of dust like rocket cars on a dry lakebed as they crossed nearly a mile of flatland, achieving velocities more usually seen in swooping raptors.

Back in camp that night, we ate elk-port-and-chestnut stew I’d brought from home, along with a salad made from the last lettuce and nasturtiums from Dainis’ summer garden, his bona fide goat’s-milk ta, and home-baked bread. Afterward in the lanternless dark, zipped inside my down bag and listening to the tent walls luff in the wind, I watched pronghorns, backlit by sunset, race across the backs of my eyelids until even that light was gone.

We were out at daybreak the next day, hunting from the moment we left camp. There were bands near the road, but we passed them by, until at midmorning we spotted a fair-size bunch tucked into a little bowl, a place where it might be possible to stalk up on them from behind the cover of a ridge. Dainis, who had not even drawn a pronghorn tag this year (but who wanted to show me “his place” anyway), came with me on the stalk and was just behind me when we peeked over the ridge and spotted the nearest pronghorn about 100 yards away. As soon as we looked over, the antelope looked back, the bedded ones getting to their feet. They hesitated, and I had only a moment.

I got a sitting rest with the .45/70, and that’s when I saw something I hadn’t seen before. When I’d sighted-in the rifle back in the summer, the buckhorn sights had looked fine; but now, as I held them on the doe that was closest to me, they had been transformed into a bat-winged smudge. I blinked twice, wiping my trigger hand across my eyes. The doe was perfectly clear, but the sights got no better. I set the blurred blade into the even-more blurred notch as best I could, and told myself I was on. Thumbing back the knurled hammer, I pressed my finger to the trigger.

The shot was more a whump than a sharp crack, and all the antelope were running. The doe ran widest, circumnavigating the inside of the bowl, until after 200 yards her run changed to a jog, then a walk. “Miss,” said Dainis, glassing her. “Low.”

I was glassing her, too, now, but wasn’t so sure. Then I saw the stain of red, back of her brisket. She stopped, then lay down, her head up. The rest of the pronghorns were trotting out of the bowl and out into the sage, and the last one to leave was the largest buck. He paused beside the doe, butting her gently with his muzzle; but when she would not stand, he left her and followed the band.

She lay on the far side of the bowl, and I thought I saw a way of slipping around behind the ridge and coming out where I could get a close, finishing shot. I gave her almost half an hour, thinking she would stiffen up; but when I went around, then crossed over a saddle and edged along the base of a low hill, I ended up a longer way from her than I’d thought, her looking right at me, as if expecting me. She sprang up at once and began to run.

I watched her, trailing her long-gone band, as her run turned to a walk after a quarter mile. She wove slowly through the sage and greasewood, then dropped from sight. There must have been a wash there, because I did not see her reappear after several minutes of watching.

Now I saw that I really had to wait, and Dainis and I hiked back to the Blazer and sat, sat for a full hour in silence, watching white clouds drift across a blue September sky. As I sat, trying not to think about the antelope, I saw a number of things more clearly than I had before: That somehow, without quite knowing how, I had developed old man’s eyes; that I’d have to get very close, now, to finish the doe; that all hunting, no matter how near or seemingly mundane, whether for a head or not, was serious; that no rifle was ever less than serious, every one capable of perpetrating serious acts. I saw all that, and saw even more the inescapable duty owed every animal we hunt: I had to see to it that pronghorn doe did not end up lying out in the sand and brush.

After an hour, Dainis and I got out of the Blazer and began tracking. The blood had dried or soaked into the porous soil, so the trail was a broken one. I’d carefully marked where the doe had dropped from sight, though, and we were able to walk directly to the spot. There was a wash there, and I moved cautiously to the edge and looked over.

She lay on the other side on a little shelf on the steeply cut bank, her head no longer up but tucked against her chest. She lifted it when she saw me and stood again, but this time slowly and unsteadily. She did not run, but staggered, and after no more than 20 yards she fell over. In the end I was able to walk to within feet of her, coming from behind so she would not have to see.

Back in camp, Dainis and I lifted her into a gnarled juniper, and after skinning her we pulled a cotton game bag around her. That night we had mule-deer mulligan, merlot, beet cake, and a couple of Nicaraguan cigars. Checking the ash on mine, I thought of the things I’d need to see to, now that I’d seen to the pronghorn: New reading glasses; ghost-ring sights for the .45/70 so I could hunt with it seriously; a new respect for the gamelands and the game at hand, those things close by not to be seen as less significant than those far away.

In the last of the evening light, I looked to the juniper at the edge of camp. The pronghorn was still there, turning in the wind, almost all the way cooled out. At this distance, she might have been perceived as something or someone white-robed, floating off the ground. Floating, or maybe even ascending.