A Longer Look at Short Magnums

Minus the hype, just how good are they? 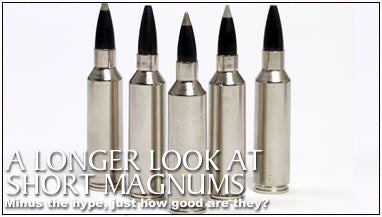 In our weight-obsessed society, short and fat is the most unfashionable thing you can be-unless you are a rifle cartridge. Then you are trendy as all hell. (Political correctness note: It is not my intention to disparage short, fat people. I have the highest respect for them. I myself am of only average height and am not readily mistaken for Calista Flockhart.)

“Shortfats” is an excellent name that I heard in a conversation about the new short, fat-bodied magnum cartridges made by Winchester, Remington, and Lazzeroni. The shortfats are now more popular than stomach pumps at a bulimics’ convention, and it’s worth a look at what they will and won’t do for you. (Further political correctness note: I have nothing against thin people, either. Some of the most admirable folks I know have to hold a coat hanger in their teeth to keep from going down the drain when they take a shower.) But enough of body types; let’s get to cartridges.

Shortfats-the Beginning
When a rifle goes bang, the barrel vibrates, twanging in a more or less elliptical orbit. If bullets emerge from the muzzle at the same point on that orbit, they hit at the same point downrange, which is good. One of the things you can do to make the bullets emerge at the same point on the orbit is to give them the same amount of time hustling their little bullet bodies down the barrel, and that is accomplished by making each powder charge burn uniformly, thus giving uniform velocities. And the best way to make powder burn uniformly is to pack it into a short column.

In the mid-1970s, a number of benchrest shooters discovered that if you lessened the body taper of an M43 Russian military case, gave it a sharp 30-degree shoulder, and necked it down to either .224 or 6mm, you produced a cartridge that gave exceptional accuracy. These short, fat cases burned their powder charges with great uniformity. Not only that, but they gave practically the same velocities as much longer, standard cartridges.

The first shortfats took the benchrest world by storm, and in 1988, Remington introduced its own shortfat, the 6mm Bench Rest Remington, based on the .308 case.

What They Are, What They Aren’t
The next step was to develop big-game cartridges based on the shortfat design, and this was done in the late 1990s. And so we now have the Lazzeroni line, which offers shortfats in .243 through .416. Winchester has shortfats in .270, 7mm, and .30; and Remington makes them in 7mm and .30. All shortfats are loaded to high pressures (around 65,000 psi) and all of them will equal, or slightly better, the velocities of standard magnums such as the 7mm Remington and .300 Winchester-and they do it with about 10 percent less powder, which means slightly less recoil.

But the .30 shortfats kick. If you are expecting to shoot a 180-grain bullet at 3000 fps plus, you are going to reap the consequences on your shoulder. Pray, do not expect to get performance that significantly exceeds the .30/06 with .30/06-level recoil.

The .270 and 7mm shortfats are much more pleasant to shoot because they use lighter bullets, and unless you are immune to recoil I think they are a much better bet than the short .30s. I have yet to meet an animal that could tell whether it had been killed by a 140-grain (.270), 160-grain (7mm), or 180-grain (.30-caliber) slug. Moreover, all three companies load their shortfats with top-of-the-line bullets. Winchester uses Ballistic Silvertip and Fail Safe bullets, Remington loads Nosler Partition, and Lazzeroni offers Sierra or Nosler Partition.

I’ve shot, I believe, a total of 10 rifles from the three makers, and all have been notably accurate. They all would shoot at or around minute-of-angle and would put different bullet weights at the same point of impact.

Selling Point
I think the shortfat magnums’ greatest advantage is the one that their makers have played up the least-the combination of their short action length and efficient powder burning enables you to own a rifle that offers magnum power but is far shorter, lighter, and handier than a standard magnum rifle. The Remington short magnums deserve special mention in this respect; they’re built on the Model 7 short action, come with 22-inch barrels, and are true sensual delights.

Do I have a favorite shortfat? Yep. It’s the .270 WSM (Winchester Short Magnum) which kicks only a shade harder than a standard .270 but sends its bullets along at 100 to 300 fps faster. It is the cat’s meow and the bee’s knees, and whatever you point it at is going to go down right smartly, provided you put the bullet in the right place.

Reloading the shortfats is easy. Just use standard-rifle primers, slow-burning powders like Reloder 22 and Hodgdon H4831, and strong bullets. All the shortfats I’ve loaded have been notably unfussy about what they like.

If you are thinking about having a custom rifle built for a shortfat, tell whoever chambers the barrel to follow the SAAMI specs exactly. There have been instances where Winchester Short Magnums have popped primers in rifles whose neck and throat dimensions departed from standard.

And finally, should you sell your beloved .270 or .300 Winchester Magnum that has served you faithfully for lo these many years, and replace it with a shortfat? Not unless you want something to regret bitterly in the days to come. The shortfats are very good cartridges, and very welcome additions to the shooting scene, but there is nothing magic about them, and they don’t render anything obsolete.

Don’t sell your faithful old rifle. Keep it and get a couple of shortfats to flank it there in the gun case. That way, you’ll be traditional and trendy at the same time.