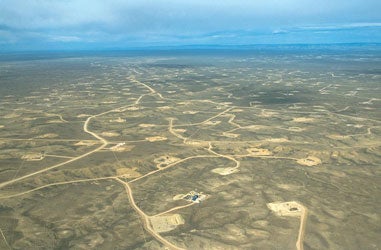 The Jonah Gas Field, south of Pinedale, Wyoming. The BLM recently authorized an "infill" project here that will increase the number of wells from 500 to as many as 3,600. For many years, gas production across the West hummed along in the background, usually welcome for bringing in tax revenues, cash, and jobs. But over the past five years, Federal agencies charged with administering public lands (such as the Bureau of Land Management) have adopted a policy that puts rapid extraction of oil and gas above all other considerations. This means that private industry has been, in essence, given permission to develop public lands with little concern for their impact on wildlife, water quality, and the traditional concept of multiple use. This development requires the construction of road networks and pipelines to service each gas well, and a near constant stream of truck traffic to establish and service the rigs and their infrastructure. Air quality suffers from the constantly-running machinery. Migration corridors for big game are blocked or destroyed, winter range rendered unusable in the short term by traffic and construction, and in the longest term--decades in the future--by the invasion of noxious weeds like spotted knapweed whose seeds travel in on the trucks and take root in disturbed ground around the wells. Peter Aengst
SHARE

I’m going to tell you something that I would not say aloud at a sportsmen’s club. I wouldn’t even whisper it in the back of a sporting goods store, because the words likely would cause any deer hunter within earshot to call me a liar. But because it’s just me and my computer right now, here goes: On a crisp October morning in Manitoba, a bachelor group of five Pope and YoungÂ¿Â¿Â¿class whitetail bucks advanced on my stand like a herd of brash Texas longhorns. There, I’ve said it. At the time I almost didn’t believe it myself, but somehow I kept my eyes off all of those antlers, didn’t get greedy by trying to pick the biggest buck and shot the last one in line. Okay, if you’re skeptical, call my guides Jeff and Bob Shebaylo; they have the numbers to back me up. Last year 50 percent of their hunters arrowed nice bucks (the biggest of which scored 171 Boone and Crockett Club points). The brothers own a small archery company in Winnipeg called Champion Bows. In fact, I used one of its one-cam Buck Sabers to kill my buck. The land to which the Shebaylos have access is near Russell. The area comprises a patchwork of crop fields (alfalfa, oats and wheat) cut into mile-square sections. Jeff and Bob hunt a couple of square miles in Game Management Area 22, which is a bow-only area for nonresident hunters (other areas nearby offer gun hunting to nonresidents). The brothers’ hunting area is laid out in aerial photos on a bulletin board in their cabin. The photos make this terrain look like a road map of deer trails-from feeding areas to bedding cover-and on them are dozens of red flags marking stand locations. Each morning after checking the wind direction, the brothers discuss hunting strategy with the hunter and which stands should be hot that particular day. You sit there drinking coffee as they point to red flags that are near draws or scrape lines and get excited just listening to them talk about what is likely to happen. As I found out, if you score early there’s some great duck and goose hunting nearby. We hunted mallards from a blind and had plenty of action and then noticed a flock of snow geese setting down nearby. We dropped in on the farmer to ask for permission to hunt and not only did he agree, but he took us to a marsh where we could pass-shoot the steady stream of flocks. He even joined us for some fine shooting. Concerned about hunting pressure? Don’t be. I asked Bob how many other deer hunters are in the area, and he actually reddened and replied, “You wouldn’t believe it. We used to have this area all to ourselves and now a few guys are hunting a farm three miles south of here.” “You’re lying,” I said as I shook my head in mock astonishment. “There are other hunters out here?”Contact: Jeff and Bob Shebaylo, 204-982-6000; Larry Bidlake, regional wildlife manager, 204-726-6448.