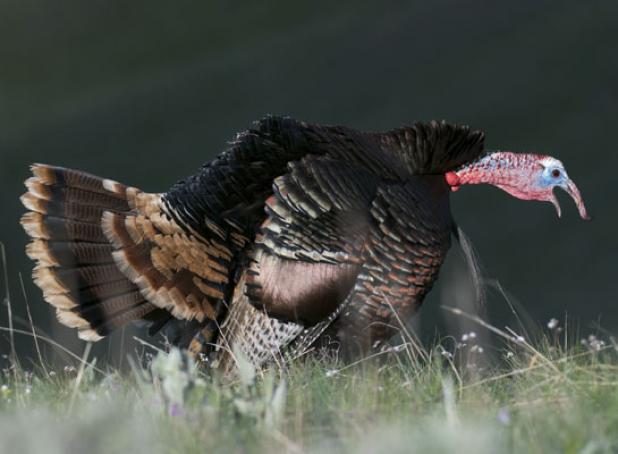 YOUR QUARRY: King Strut
**
Psychological Profile:** King Strut is the classic alpha male. He isn’t necessarily the biggest bird around, but he thinks he is–and that’s what matters. He lives to assert his dominance. He’ll fight any tom, any time, and it’s this aggression that makes him the top bird. Within his territory, hens run to him and gobblers fear him. With his dominance well established at this point in the season, he doesn’t have to fight much. But if a strange gobbler shows up, look out.

Modus Operandi: King Strut plays it cool, because he can. Every bird in the flock recognizes his voice when he sounds off from the morning roost, and hens that are ready to breed fly to the base of his tree. After his morning romance, the King heads to a favorite strutting area, where he simply gobbles, parades, and waits for another hen to appear.

The Plan: Forget the normal seductions. This bird does not chase yelps and won’t give ground to a hen decoy. No, the key to killing the King is to challenge his dominance. His aggressive posturing and body language keep local gobblers in check. To trip his trigger, you need to show him a strange “tom” that won’t back down.
**
The Setup:** First, locate his favorite midmorning strutting area. If you’ve been hunting him unsuccessfully, you may already know where this is. Otherwise, spend a morning glassing and listening; if necessary move in to scout for drag marks on logging roads or open ridges. Next morning, get to that spot early and stake out a full-strut gobbler decoy. Your fake should sport a full fan and a long beard and be facing your quarry’s anticipated approach. After his morning rendezvous with hens, the King will show up, take the decoy’s in-your-face posture for aggression, and barge in for a fight.
**
Best Calls:** The King may gobble at your hen calls, but they won’t bring him in. What will is a gobble tube. Use it only enough to get his attention. Once he spots your strutter decoy, put the call down and get your gun up.

Turkey Tip: Tag The Tom That’s All Show and No Fight