YOUR QUARRY: Dos Amigos Psychological Profile:** Neither of these buddy birds does anything without the other; they are a pair,... 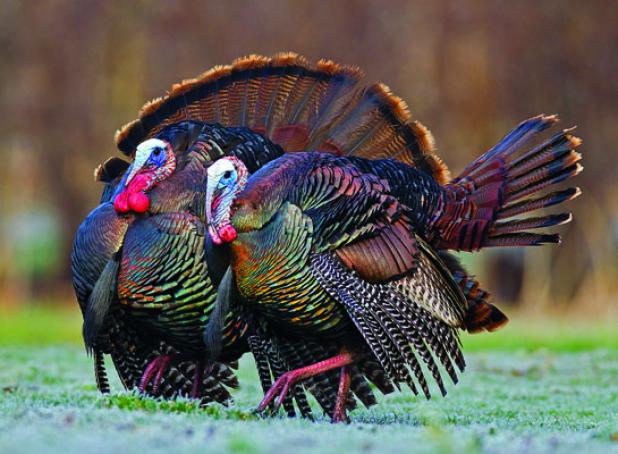 Psychological Profile:** Neither of these buddy birds does anything without the other; they are a pair, for sure, and maybe a couple. It’s not entirely clear why they pal around. Such an alliance clearly has practical advantages, including strength of numbers in a fight (or avoiding one) and two sets of eyes and ears to detect danger. The fact that they seem to show little romantic interest in hens, however, may suggest a different kind of partnership. In any case, neither knows who is in charge from minute to minute, which makes them maddening to hunt.

Modus Operandi: These guys will quickly respond to your hen and locator calls from sunup to sundown–but they’ll rarely take a step toward you. Weird around aggressive hens and skittish about other gobblers, they’ve got their own agenda, which seems to be about covering as much ground as possible in a day, and gobbling as they go.
**
The Plan:** Conventional tactics won’t fool Tom or Tommy, but they’re still turkeys: They roost, eat, travel, and socialize with other birds within a fairly predictable home range. The trick is to pattern them. Listen to their frequent gobbling to learn their favorite hangouts and the routes they follow between them. Then plan an ambush. It’s not a glamorous tactic, but it’s the best way to tag a buddy bird.
**
The Setup:** Place two or three feeding hen decoys–no gobblers or jakes–in one of the Boyz’ favorite feeding -areas or loafing spots, or in a funnel along a travel route. Then erect a pop-up ground blind nearby, get comfortable, and settle in for a potentially long wait.

Best Calls: Don’t let your boredom lead to overcalling. Aggressive yelps or cutting can freak these birds out, and gobbling could flat ruin your hunt. Instead, take a softwood striker to a mellow slate to make contented clucks and purrs. You’re not trying to call them in so much as trying to convince them the world is O.K.

Late Season Turkey Tip: Tag The Tom That’s All Show and No Fight