The Basics: How To Start Hunting Turkeys in the Fall

Learn how to get more birds this season. 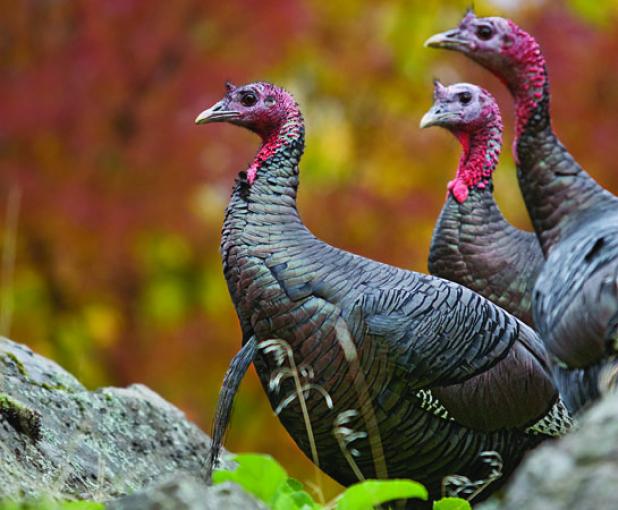 How often in hunting do you get to play the part of a cue ball? That’s exactly what you are when you sprint screaming into the middle of a flock of turkeys. A good break is just as important to fall turkey hunting as it is to a game of nine-ball.

Because running at turkeys is encouraged, fall turkey hunting differs from the spring game. But it is definitely turkey hunting, and once the shouting and running are over, calling and concealment bring birds into range. So if it saddens you to have put your gobbler gun away for almost a whole year between seasons, fall turkey hunting might be the fix you need.

Turkey hunting is an autumn tradition older than football, but the sport’s reboot in the 1970s and ’80s turned us into a nation of spring hunters. Trap-and-transfer efforts brought turkeys back to states where they had been gone since the turn of the century, and gobbler-only spring seasons served to protect growing flocks. Fall either-sex seasons were phased in later, and now some 40 states have an autumn season. With a few exceptions (notably Pennsylvania and the Virginias), the opening of those seasons is met with mass apathy. Some don’t want to shoot birds that aren’t gobbling. Others don’t want to take a hen. Most are simply more focused on deer and other game and don’t know what they’re missing. What this means is more turkeys for you.

Guns and Gear
Fall turkey gear is identical to what you need for spring: camo clothing (plus some orange in Pennsylvania), a cushion to sit on, binoculars, and calls capable of hen yelps and high-pitched poult whistles.

A fall turkey gun should be lightweight and have a sling, as you will carry it for miles. I like sights of some kind on mine and have used iron sights, red dots, 1X scopes, and plain beads. I like a Full choke because it allows me to shoot at one bird in a tightly gathered flock without hitting any others. The birds can be small—hens may weigh only 10 pounds—so choose a heavy load of No. 6 shot. A 20-gauge can be a deadly turkey gun when loaded with Hevi‑13 or a similar nontoxic load. And you can always carry a few of those tight–patterning loads in your pocket if you want to hunt other birds or small game but be ready for any turkeys you may encounter.

Scout and Pattern
Gobblers will flock together in fall, as will hens with poults. The two flocks don’t mix but you’ll find them in the same kinds of places. Check food sources: mast, corn, grasshoppers, leftover sunflower seeds in a dove field. Look for bare spots where they dust, too. Although turkeys can cover ground now, some flocks keep very regular schedules, showing up to feed at the same place and time every day. Pattern those birds by finding their roosts, just as you would in spring, by searching for piles of droppings under large trees. If you find a roosting area, set up close to the flock at dawn, or sit between a roost and food in the morning.

Can’t find birds? Walk, stopping to call occasionally. A series of generic lost turkey yelps may bring a response. Glass open fields and listen for the ruckus of 20 turkeys marching through the fallen leaves until you find them.

Scatter and Call Back
The scatter is the classic fall tactic, but it does beg a question: If you’re close enough to turkeys to scare them away, why not shoot one? You can, sometimes. Usually, though, you can only get close enough for a scatter but not close enough for a good shot. Running toward a flock to shoot at running and flying turkeys 60 yards away is not as reliable as taking a head shot at a called-in bird.

When you spot a flock of hens and poults, creep close enough so you can charge in screaming. The best break sends turkeys in all directions, in which case you should sit at the center of the break. More often, you get a break where the flock flushes in one direction, fanning out as they go. Go after them and set up where there will be lost turkeys to either side of you.

Scatter and recall is turkey hunting for the patience-impaired: Within five minutes, you’ll hear the high, frantic whistles of young -turkeys looking for one another. Join in with whistles of your own in four- or five-note runs—a single-reed diaphragm or a dog whistle with the ball removed works best—and/or make a long series of yelps to simulate a hen calling her young. Your gun needs to be up and ready, because soon you will have eyes on you from all directions as the birds converge. After a good scatter, you can tag a bird in 10 or 15 minutes if the mother hen doesn’t gather them up and take them away.

Pick a Fight or Pick Off a Loner You can scatter a gobbler flock, too, but adult birds are self–sufficient and may not get together for hours, or even a day or two. If you encounter a flock of gobblers—or if it makes no sense to you to scare turkeys away after you finally find them—set up where you know or think the birds will be. Start with lost yelps. When you get a response, call aggressively. Cut off and mimic any answer you get. Turn up the intensity. You’re trying to pick a fight, and if you succeed you’ll be treated to the sight of a whole flock charging in to kick your tailfeathers.

It’s possible, too, to find a lone turkey wandering around. One October day I glimpsed a bird disappearing into some long grass. I snuck around to a woodlot where I could call to it. Not knowing if it was a tom or a hen, I made reassuring turkey clucks and purrs. One instant I was looking at empty woods; the next, an 18-pound gobbler stood before me at 12 steps, having come in silently. The turkey obligingly stepped behind a tree so I could get my gun up. Toting the gobbler out of the woods, I realized it was still six months until the spring season would begin.

From the October 2012 issue of Field & Stream magazine.