Four basic calls to bring the ducks from over there to over here. 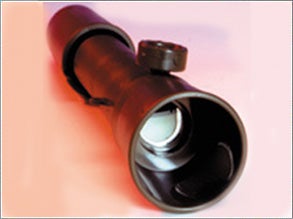 Despite the mystique that surrounds duck calling, the basics are easy to learn. Almost all ducks will respond to the quack of a hen mallard, which you can learn to make in a few minutes. Add the feed call (a.k.a. the chuckle) and you’ll have all the notes you need to call ducks.

The outside of a duck call consists of two parts: the thinner “stopper” and the larger “barrel.” Hold the call by laying the stopper in the web of flesh between your thumb and forefinger. Now, put the open end of the barrel to your lips as if you were taking a drink from a bottle of pop. (It’s no coincidence that the mouths of many calls are shaped like the top of a Coke bottle.)

Don’t puff your cheeks and blow into a call. Instead, talk into it, bringing the air up from your diaphragm. To make a single mallard quack, pretend you’re a quarterback calling signals. Say “hut” into the call. Some people prefer to say “whit” or “quit” or “do-it.” Whatever sound you make, be sure to cut the air off sharply. The t shouldn’t pop. Your tongue should almost stick to the roof of your mouth as you complete the note. To make the basic call of a hen mallard, count off five quacks of equal tone and volume.

After you’ve learned to quack, try the feed call. Instead of saying “hut” into the call, say “ticka ticka,” moving your tongue quickly up and down.

Perhaps the best way to learn to sound like a duck is to listen to real ducks at refuges or even around city park ponds.

** The Calls**
Once you’ve mastered the quack and the chuckle, you can put them together to make the four calls you’ll need to fool ducks:
Hail call: The hail is a series of loud, pleading quacks. It’s only meant to be used at distances of 400 or 500 yards to grab a flock’s attention. Start with six or eight long quacks, followed by more quacks of descending volume and duration. Once you see ducks react to the hail, either by turning or slowing down, stop hailing them.

Greeting call: As the ducks get closer, switch to a greeting call, which is a series of five excited quacks.

Feed call: Use the feed call at close range. Done properly, the chuckle mimics a whole group of contented ducks on the water. “Ticka” into the call, mixing in a few quiet quacks.

Come-back call: If the ducks are leaving your decoys, try the come-back call. It’s similar to the greeting call, but you make louder, longer, pleading quacks. If your come-back call makes the ducks turn around, go back to the feed call.