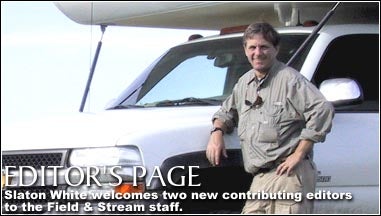 I’m pleased to announce the addition of two new contributing editors to the staff of Field & Stream: Tom Fegely and Geoffrey Norman.

Tom Fegely, who hails from Pennsylvania, is the author of our new nature column, Woods Wise. The editors of Field & Stream looked for an experienced writer who could bring the natural world into focus for hunters and anglers. Tom’s background-he taught environmental education and ecology for 14 years before becoming a professional outdoor writer in 1976-makes him the ideal choice for this assignment. His first column (June) was on fire ants. As the recipient of nearly 300 bites from these vicious pests, he speaks with hard-won authority. This month, with “Mast Hysteria,” he writes about the different types of mast found in the deer woods. Besides newspaper and magazine articles, Tom is the author of eight books.

He says, “My idols were the hunter-naturalists whose work I followed as a youngster. We may be out there hunting deer or ducks or casting for bass and bluegills, but we’re also witness to so much more. I was weaned on squirrels and pheasants, but I remember being distracted time and again by everything from owls and weasels to strange insects and wildflowers.”

Geoffrey Norman, originally from Alabama, now makes his home in Vermont. He will write our new bimonthly ethics column, The Right Way, the first installment of which (August) discussed the sticky issue of dove limits in party hunts. This month he tackles legal shooting times.

In tapping Geoff for The Right Way, the editors of Field & Stream sought a well-rounded writer who could put himself in the boots of the average reader, the one who in trying to comply with the spirit of the law might run afoul of the letter of the law. And as any experienced outdoorsman knows, there’s also a fine line between what’s right and what’s legal.

Geoff has hunted and fished throughout North America. He has written for several hunting and fishing magazines, as well as for_ Sports Illustrated, National Geographic_, the Wall Street Journal, and_ Esquire_. He has also written 13 books. In addition to The Right Way, Geoff will contribute features, one of which-“Homecoming”-ran in the July issue.

These two appointments are part of our continuing plan to keep Field & Stream as your “must-read” hunting and fishing magazine.