Nothing good happens at the rear end of the gun. 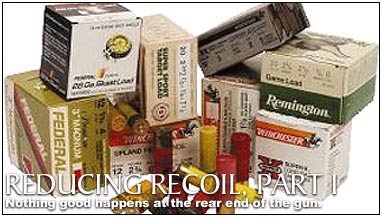 My landlord Seth was a leathery old farmer who weighed about 130 pounds and shot geese with a 10-gauge side-by-side that frequently doubled. The recoil never fazed him. “I’m so light it just picks me up and throws me backward,” he said. “I’m afraid that gun would hurt a big guy.”

If two 10-gauge goose loads are launched in one direction, a little farmer and his feed cap will indeed go sailing off in the other; that’s Newton’s Third Law of Motion in action. Whatever happens at the muzzle produces an equal and opposite reaction at the butt.

In the short term, recoil bestows bruises, sore jaws, stiff necks, and headaches. In the long run, hard-kicking guns condition you to flinch as you pull the trigger. Ultimately, cumulative recoil can detach your retinas, injure your spinal disks, and put your chiropractor’s children through college. Serious target shooters are the principal victims of recoil abuse, but the trend to high-velocity shotshells and 3-inch magnums means that even we ordinary hunters take our share of lumps when we pull the trigger.

Getting Your Kicks
Although we can’t eliminate recoil, we can reduce it. Actually, we can reduce recoil in two ways, because there are two kinds of recoil: “free” and “felt.” Free recoil, or recoil energy, is a quantifiable function of gun weight, payload weight, and payload velocity. Felt recoil is “kick,” or how much those recoil energy foot-pounds hurt us when we shoot a gun. A recoil pad, for instance, doesn’t affect a gun’s recoil energy but does soften the blow, thereby cutting felt recoil.

The very best recoil reducer is a lighter and/or slower shotshell. Decreasing shot weight by 1/8 ounce or cutting velocity by even 50 fps causes a noticeable difference in recoil. Keep that in mind as you choose hunting ammunition. Ammo gets faster and heavier each year, offering a powerful temptation to stray from the path of lightness when shopping for shells. Here are some practical suggestions for the recoil-conscious: