Different hunts require different shooting skills. Learn them all and you'll be ready for anyting that flies. 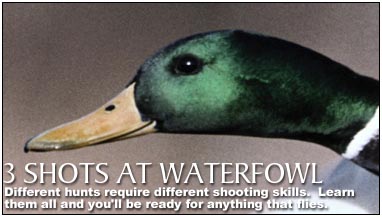 Hitting a duck or goose while you’re bundled up like the Michelin Man and standing knee-deep in a bog ranks near the top of wingshooting’s “degree of difficulty” scale. Even in the best conditions, waterfowling demands expert shooting and range estimation. Moreover, to become a complete waterfowl shot, you need to master three distinct shooting situations: jump shooting, on the pass, and over decoys.

Of all waterfowling situations, jump shooting most resembles upland hunting. The flush takes you by surprise, the target rises quickly, and you shoot at birds that are going away or quartering. Because of this similarity, the same mistakes that afflict bird hunters plague jump shooters. Lifting your head off the stock-the better to see a flushing bird fall after you’ve blotted it out with the barrel-ensures a miss. So does shooting too soon, while your shot pattern is still the size of a grapefruit. It’s very easy to shoot underneath a flushing duck, which rises even more steeply than most upland birds.

When you leap up, startling the ducks into the air like a covey of web-footed quail, resist the temptation to rush the shot. Force yourself to pick a single bird from the bunch. Take a short step with your left foot (if you’re right-handed) toward that bird, then swing the gun up and through the duck. Focus on the top of its head and think of trying to scalp it with your shotgun. Confine your range to 30 yards or preferably less. Unlike decoying birds whose heads, necks, and breasts are exposed to your pattern, jumped waterfowl are going away from you, offering a small target protected by bone. If you miss twice, save the third shell for the one duck in the flock that always seems to sleep through the main flush, then wakes up and flies away while your gun is empty. Teal do not spring straight up like their namesake sporting clays target, but they do rise faster than any other puddle duck. On the other hand, teal often give you a second chance. If you miss, reload quickly and get down; the flock may well swing around and come right back, giving you a passing shot. Too bad for me that Springing Teal targets don’t offer the same opportunity. That said, sporting clays, with its many falling targets, its high towers and rising, traplike presentations, makes excellent practice for all three types of waterfowl shooting.

With a little ingenuity, you can set up your own trap to mimic the shots you encounter in the marsh. The trick is making sure your trapper is completely out of the line of fire if you want to try incomers and crossing shots. Once you master the shots that give you trouble, try calling “pull” while sitting on a 5-gallon bucket or lying flat on your back. You won’t break as many targets shooting that way, but you will kill more ducks and geese in the fall.

A high goose flying steadily from Point A to Point B may be traveling 45 miles an hour but looks as if it’s barely loafing along. It may be 30 yards up or 60.The difficulty of judging speed and range makes pass shooting the trickiest type of waterfowling.

We all know you need to shoot well ahead of a high bird in order to hit it. Unfortunately, the deceptive speed of high ducks and geese compounds the most typical pass-shooting error, which is to measure a long lead too precisely. Combine an apparently slow moving bird with a deliberate swing as you try to calculate 8 or 10 feet, and there’s no way you’ll generate enough gun speed.

You needn’t be precise. Think of lead not in feet but in terms of “some,” “more,” and “a lot” (or a Yugo, a minivan, and a school bus; whatever works). Don’t mount the gun and attempt to track the target as if you were some sort of antiaircraft gun. That will kill your gun speed. Instead, watch the duck or goose until it comes well within range, then move the gun briskly through the target as you bring the stock to your face. Swing ahead until you see daylight between e muzzle and the bird, shoot, and follow through. Try to miss the bird in front and you’ll probably center it perfectly. Some hunters find it easier to imagine and focus on a moving spot in front of the bird while keeping the bird in their peripheral vision. Pretend the duck or goose is holding a yardstick, a 2×4, or a flagpole in its bill, swing along that line, shoot the ball off the end of the flagpole, and keep swinging.

Accurate range estimation makes the difference between responsible pass shooting and sky-busting. How do you tell if a bird is in range? Practice. Spend time watching ducks and geese at city parks where you can study birds in the air in relation to trees or buildings. A really big mature oak tree measures 100 feet. If you stand at the base and look straight up, an oak seems ridiculously tall, but a duck or goose skimming the tree’s top is well within effective gun range. As you watch the birds, notice at what height you can see details like eyes, feet, and color. Study the size of the bird at different distances and try to file that image in your mind to compare with birds in the field. Some people suggest measuring a distant duck or goose against the width of your gun muzzle to judge its range. Maybe, but any kind of looking back and forth between the bird and barrel will slow your swing and make you miss.

If you’re going to take long shots at passing waterfowl, you must have an idea of where they’ll hit the ground before you shoot. It does no good-in fact, it does plenty of harm-to make a long shot and then lose a bird. Mark fallen birds down carefully, and skip the doubles unless you’re standing in a picked field where dead birds are easy to find.

Look up vulnerable in the waterfowler’s dictionary, and there is a picture of a duck, cupped up and hovering over the blocks. Yet all too often as birds drop into the landing hole, you stand to shoot, empty your gun, and they fly away. How could you blow such a gimme?

Simple: A decoying duck that appears to be hanging in the air is actually losing altitude quickly. Furthermore, as the duck is dropping, you are standing or sitting up and raising your gun. If the muzzle is rising as the duck is descending, you will shoot right over the top. For you to hit a moving target, you have to trace the target’s path with your gun muzzle.

First, separate the motions of standing up and shooting. Get to your feet and bring the gun to a ready position-muzzle slightly up, the gun’s butt lightly tucked under your arm. Once up, you’re a stable shooting platform. Now you can concentrate on killing the bird. With your eyes on the target, mount the gun, making sure to push the muzzle out toward the bird to keep the butt from snagging on your parka. Bring the stock to your face as you swing the muzzle down through the duck. Shoot the instant the buttplate hits your shoulder.

That’s the “how-to” of hitting a decoying duck or goose. The “when-to” is another matter. The mallard suspended over your decoys can catch the wind and ride it safely out of range in an instant. Let puddle ducks come as near as they will before you call the shot. Some hunters go so far as to land a flock in the decoys, then jump-shoot them. Diving ducks are different: Instead of flaring at the sound of a gun, they simply speed up. You can start shooting at divers as soon as they come into range.