The dog appeared from nowhere. Now what? 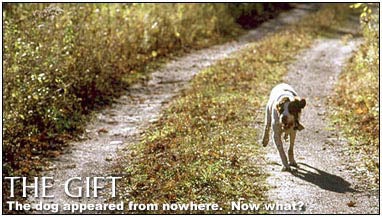 In 1972, I was living in an apartment with my wife and young son, juggling college and a part-time job in a sporting-goods store. A bird dog was a luxury I simply could not afford, so I often walked up grouse solo, with all too predictable results. As I wandered through thick cover on my own, I often thought about the hunts I had enjoyed in high school with the family shorthair, Gus, my friend Scott, and his setter, Speckles.

Scott and I shared a single-shot 20-gauge, but when Gus was afield I sometimes didn’t need the gun. Gus would creep on his points, and occasionally he’d bag a bird by stealthily placing his large front paw on the back of the bird and lunging to grab for it as the bird dared to take to wing. The heavy grasses we often hunted made this blatant breach of bird-dog etiquette quite successful on pheasants, but I always lived in fear that Gus would one day harvest an illegal hen. Speckles had much better manners afield, though neither Scott nor I had a clue about training bird dogs. We were going strictly on their instinct.

I had worked extra hours at the store so I could hunt between Christmas and New Year’s, and as I stepped out of the car and looked at the snowy landscape, I again longed to be in the company of a bird dog. An hour later, I had only managed to touch off a couple of desperation shots at birds that caught me by surprise. I allowed myself a brief moment of self-pity. Wouldn’t it be great to find a pup under the tree one of these days? I thought.

I was staring at a row of snow-covered pine trees when a brown-and-white flash caught my eye. It was a dog. No, make that a bird dog! I stopped and watched the little liver-and-white setter for a bit, expecting to be greeted by its owner following closely behind. But no one came by; meanwhile, the little dog had locked up hard on some hazel brush about 60 yards away.

I decided not to waste the point, and the setter remained staunch as I moved to within 20 yards. A quivering tail told me this bird was pinned. As I eased closer, the bird launched in a spray of snow. I felt sure the shot would bring the dog’s owner. But as the dog retrieved the grouse, no one appeared. The setter placed the bird about 10 feet from me, then turned to renew the hunt.

No voice called, no whistle blew. How odd, I thought, that such a fine little dog would have appeared from absolutely nowhere. I followed the setter a while longer, learning its gender when it squatted to relieve itself in the snow. I tried calling to her, “Here girl! Come!” but she would have none of that. I could see a brown leather collar around her neck, but she wouldn’t let me get close enough to read the tag.

She continued to cast back and forth about 30 yards in front of me, occasionally checking to see if I was following. We hunted for a couple of hours and bagged two more birds before I decided it was time to head home.

We got back to the car as the sun began to dip beneath the treetops. I called to her again, but she lay down about 15 feet away and began to remove the little clumps of snow that had collected in the hair between her toes. I didn’t know what to do. I didn’t want to leave the dog behind, but as long as she sat just out of reach-meticulously tending her toes-there was nothing I could do.

That changed when I opened the back door to put my coat inside. In a flash, the little setter flew past me and landed on the seat, tail wagging wildly. Feeling a great sense of relief, I praised her and petted her. At last I was able to read the tag attached to the tattered brown leather collar. Her name was Jessie. Just below her name was an address and a phone number. I didn’t know the area that well, and I decided to drive to a nearby gas station to call the owner.

Jessie kept licking the side of my face as we drove down the highway. The reserved, standoffish little setter had been transformed intoo a wet but happy kissing machine. I must admit, at this point I thought about just driving straight on home. But deep inside I knew I had to make at least one call. I dropped the dime and held my breath as the phone on the other end of the line began to ringÂ¿Â¿Â¿and ringÂ¿Â¿Â¿and ring. Just as I thought fate might be giving me the break of a lifetime, I heard an out-of-breath little voice say, “Hello?”

“Umm,” I said, fumbling for the right words. “Are you missing a dog?”

At that point an adult male voice interrupted the child and said, “Hello?” In the background I could hear the girl say, “Daddy, Daddy, he found Jessie!”

Well, any thoughts of keeping Jessie went right out the window when I heard the excitement and relief on the other end of the telephone. After receiving instructions to the house, I returned to the car, which now sported fogged windows and smelled heavily of wet dog. Twenty minutes and 200 kisses later, I turned into the driveway of a home beautifully adorned with Christmas decorations. At the sound of my horn, the front door flew open and a little blond-haired girl came running out, yelling, “Jessie, you’re back!” I opened the car door and watched the setter bolt out and sprint toward the girl, who was now kneeling in the snow to greet her dog.

After the reunion had calmed down, I was invited in for a cup of hot coffee. I found out that Jessie had run off while chasing a deer that appeared in their backyard early on Christmas morning. The daughter, Julie, was so upset that her parents had elected to delay opening the gifts until they had received some word of Jessie’s whereabouts or fate. The magnificent tree in the living room was surrounded with unopened presents. Now the family could finally open the gifts. And as I walked back to the car, I realized that I, too, had been given a special gift, one that has kept on giving for 30 years.