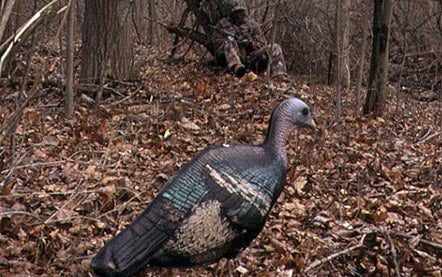 Turkey hunting in the fall isn’t just about sprinting into the midst of a bunch of young birds, screaming to scatter them to all points of the compass, and calling in the stragglers. There are other ways to raise your heart rate in the fall woods. Call in a flock of hens and poults and feel the adrenaline jolt that accompanies the racket of 20 pairs of large, scaly feet stampeding through the leaves. Provoke a gobbler, and he might treat you to a strutting display every bit as intense as any you saw last April.

What’s the difference between spring and fall hunting? Adult turkeys aren’t much interested in the opposite sex come autumn, but they’re keenly interested in turkeys of the same sex. (No, not that way.) Hens are always curious to see where the new girl fits into the local pecking order, and gobblers are often eager to chase off a rival. Young birds want to find each other, or their hens. Turkeys are vocal and gregarious and respond to calls year-round. Here are four ways to hunt fall turkeys without scattering them first.

1. Infiltrate a Roost
Like spring hunts, fall outings often begin in the dark. Get into the woods early and set up close to a roost full of hens, jakes, and jennies. At first light those turkeys hit the ground as a disorganized mob; sometimes it takes almost an hour for a big bunch to shake itself into order. Play the part of one more turkey looking for its flock by imitating the calls you hear, which could include sleepy clucks, yelps, angry cackles, kee kee whistles, and even jake gobbles.

2. Find a Flock
After fly-down time, walk quietly, looking, listening, and occasionally yelping. If you don’t strike birds in your travels, you may hear them walking. Turkeys make even more noise plodding through the fall leaves than we do. If you hunt near a reservoir, a good method of spotting turkeys is to cruise the shoreline in a boat, watching for birds in the strip of land between woods and water. Once you locate turkeys, ease ahead of their direction of travel and begin yelping. When birds answer aggressively, mimic their calls. Be insistent; aggravate them sufficiently, and they’ll come bustling in to run you off. If the birds aren’t in a fighting mood, be patient and call softly as they feed their way toward you. 3. Lay an Ambush
While scouting, you may have found a travel route or feeding area that turkeys use on a regular basis. Get there before they do and put out decoys. If you’re hunting smaller groups of turkeys, put out one or two hens and a standing jake. In situations where many flocks congregate (as, say, in Midwestern cornfields late in the season), set up a rival crowd. A couple of half-strut jakes and five or six hens make a statement: This field isn’t big enough for all of us. **4. Goad a Gobbler **
Most people kill hens and young birds in the fall because they hunt where the hens are and make hen sounds. To tag October longbeards, you have to target them specifically. Like mature whitetails, gobblers sleep, travel, and feed apart from the women and kids. Look for big tracks and J-shaped droppings, then set up shop as the new gobbler in the woods. Make low, drawn-out yelps with a slower rhythm, or try a fighting purr. You may bring the flock in, strutting, gobbling, and ready to fight with you. Don’t worry. The only beating you’re going to get is the fast thump of your heart against your ribs.