Find explosive grouse action at the end of the year. 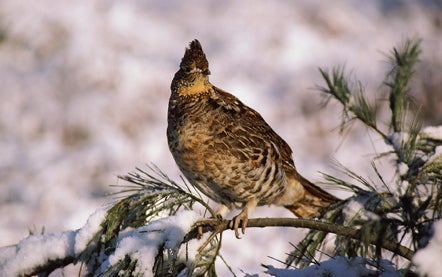 December grouse hunting can be a quiet affair. The birds are in very small, specific pockets of cover, and a hunter can walk for hours without flushing a bird.

But once you locate these isolated covers, you’re likely to find them full of grouse. The key is focusing on the two essentials that grouse need in order to survive winter-shelter and food.

Protective Cover
Grouse often spend the night roosted in deep, fluffy snow where they’re insulated from cold and hidden from predators. After they wriggle out of their burrows and have a morning meal, they spend midmorning through the late afternoon in habitat that provides thermal protection. In most regions, this means evergreen stands. Hunt the edges of spruce swamps, which are several degrees warmer than surrounding uplands and sheltered from wind. Stands of spruce or balsam fir near an aspen clear-cut are another solid bet. I’ve also found pockets of grouse loafing in plantations of white and red pine, especially those that haven’t been thinned.

Recently logged hardwoods are great places to hunt, too. The tops of felled oaks hold their leaves for several seasons, and the resulting tangle of branches makes for an umbrella-like shelter that grouse love. Subtler spots worth investigating include any covert on a south-facing slope, which will be significantly warmer than the surrounding landscape. Such inclines receive the longest shot of available sunlight and are protected from prevailing northerly winds. The sun-tolerant trees and brush of south slopes also produce the thicker cover that grouse prefer.

Prime Food
Grouse like to feed early and late in the day. Because they are primarily eating buds at this time of year and must sit in treetops to get them, filling their crops during a brief flurry of activity reduces exposure to avian predators.

Aspen buds are the preferred food of wintering grouse, but birch and ironwood groves are attractive, too. Grouse will also gravitate to oak stands, apple orchards, and picked cornfields. To find grouse feeding on buds, walk logging trails or drive secondary roads at dawn and dusk, searching the treetops for silhouetted birds. When you find a food source, count on grouse to revisit it until it’s depleted.

Run and Gun
During winter, grouse gather in small pockets. Hunting them becomes a run-and-gun affair described by one buddy as “lots of walking, interrupted by the occasional shooting spree.” Once you’ve identified potential covers, the best approach is to move quickly between them, ignoring secondary habitats that might have held birds earlier in the season.

When you flush a grouse, be ready for a follow-up. Typically, several birds will emerge from a thicket. I’ve stumbled upon as many as nine grouse huddled together. And don’t forget to look up because winter grouse are wary and will frequently hop into a tree when they hear your approach. If you hunt with a dog, keep him close. I try to not even talk to my tight-working golden retriever to avoid warning the birds. Finally, resist the temptation to revisit hot covers too often, and refrain from reflushing birds more than once. Winter grouse forced from familiar habitat are more vulnerable to predators and the elements. I also limit myself to a ruff or two per hunt. Of course, it seems I rarely have to exercise such discipline-finding grouse can be a lot easier than hitting them.