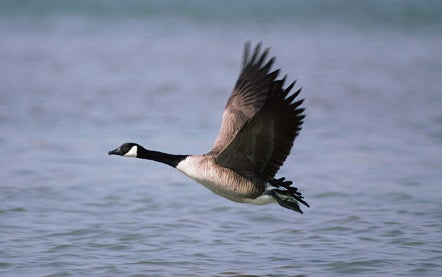 Decoying geese doesn’t get any easier than during the early season, when naive young honkers are most abundant and older birds aren’t yet ultrawary. Nonetheless, if you want geese to sail confidently into your spread, you need a solid plan.

It starts with scouting. Look for fields that geese are actively using or regularly flying over as they travel to and from roosting and feeding sites. Fields of cut grain are generally best at this time of year; corn and wheat are traditional favorites. But don’t overlook green fields-particularly second-cut alfalfa-which remain attractive to geese prior to the first hard frosts. Use your time not only to locate promising areas but to pinpoint exactly where the geese are feeding or what part of the field they’re flying over. This way, you’ll know where to set up your spread.

Once you’ve secured permission to hunt, the next critical step comes in the morning, when you’re putting out decoys. Early in the season, goose flocks usually consist of small, semiterritorial family groups that are still assembling into larger flocks. Set up your spread to reflect this by following the steps below:

1 Create distinct groups of a half dozen or so decoys that collectively form a large J- or U-shaped pattern. Make sure there’s a clear landing zone toward the upwind edge of the spread. **2 Place full-body decoys **and quality shells at the downwind end of the spread. Early-season geese are not as wary as they will be later in the fall, which means that you can succeed with less-than-perfect decoys. Still, it pays to place your best dekes at the approach, as these are the ones that incoming geese will give the closest inspection.

3 Use silhouettes, rags, and lesser-quality shells to fill in the curve of the U. 4 Be sure to include some motion decoys such as flappers, kites, or flags along the upwind edge of the landing zone. These dekes are particularly effective on young, inexperienced birds that have yet to be exposed to sustained hunting pressure. Goose Magnets and Gooseview Fly-N-Flags are two brands that work well and are relatively easy to set up.

**5 Situate yourself **just upwind of the landing zone. Portable coffin-style blinds concealed with stubble work best, but early on you can simply lie down among the decoys. Wear camo that closely matches the field cover, and position a few silhouettes or shells to break up your outline. Then wait for the geese to come sailing in.