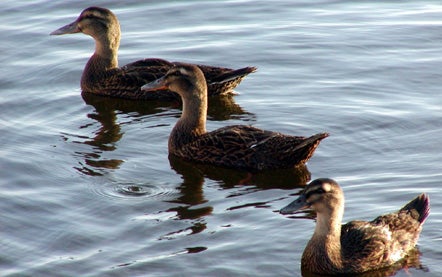 It’s not extremely hard to make noises that attract ducks. But relatively few hunters actually work ducks. There’s a big difference. The former merely gets a duck’s attention. The latter guides it all the way to the spread, resulting in more and easier shots. You need to know what to say and when to say it.

**When They’re Distant **
Let’s use a small flock of mallards as an example. You should begin calling as soon as you can make them out as ducks, as opposed to merely dots in the air. Start with a loud five- to eight-note hail call until they turn. If they don’t turn, continue calling until they’re out of earshot. If the flock circles from behind or to the side, let them pass, then call again to bring them around. This way, you avoid piquing the birds’ interest while they’re over the blind, where they may look down and spot you.

As the ducks continue to circle the decoys, call to wing tips and tails-that is, when they are crossing out in front or going away from you. Time this so that when they turn they’ll be facing the decoys. Once they do, either shut up completely or use single quacks, mallard drake grunts, and feeding calls to create background noise that signals all is well with the “birds” on the water.

Watch the ducks closely. If they begin to swing in larger, wider circles, it’s a sign that you need to bear down with the hail call again. Otherwise, keep up the background noise, reducing the volume as the birds get closer and eventually make their final approach.

When They’re Coming In
Most experienced callers advise against talking to a duck that’s coming at you. The exception is when you’re hunting a crowded public marsh, where you often have to call a bird all the way to the spread or risk losing it to someone else. Talk it down by making a single quack every few seconds, or with a single-cut feed call–not the rolling ticka ticka sound ducks make in the air but a series of evenly spaced cut sounds.

Incoming ducks that threaten to land short of the decoys demand immediate loud calling to either bring them in the rest of the way–or to frighten them off. You don’t want live birds on the water out of gun range competing with you and your dekes.

As a rule, when ducks have been in the area awhile, you need to call quietly and sparingly. But if your toned-down tactic doesn’t work, try increasing the volume and frequency instead, on the theory that you may pull a young bird or two from a flock of wary veterans. At the end of a tough late-season hunt, one or two young birds is far better than nothing.