The best way to get great results from your retriever is to get into his head. 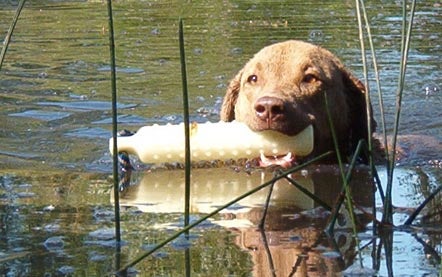 Years ago, a great gun dog writer told of the time he tried to school a black Lab bitch. She didn’t catch on, and he grew angrier and angrier, giving one contradictory command after another. Finally, the Lab simply sat down, cocked her head, and stared at him-hard. In that moment, something passed between them. “I realized,” he wrote, “that she was saying Â¿Â¿Â¿Look, stupid, when you figure out what you want me to do, and I understand it, I’ll do it.'”

From then on, dog training was never the same for him. He rethought everything he did, but it was from the dog’s point of view. And that black Lab bitch went on to be the best dog he ever had.

When a dog fails in training, it might be because it doesn’t understand what it’s supposed to do. You can rectify that by planning your lessons to make it easier for the dog to succeed than to fail. Rewards for correct responses are much more effective than punishment for messing up. The following techniques are useful for teaching five of the most common skills your retriever needs to know.

Steadying
Anchor the dog, let her watch you throw a series of dummies, and then go pick them up yourself (or have a helper do it) while she remains on “stay.” During these sessions, you should pick up four or five dummies for each one you send the dog after. This way, the dog never knows when she will be sent to retrieve. Her frantic eagerness to get that object you threw will be tempered by uncertainty, and she’ll wait to see what you do next. The command to fetch becomes a reward for waiting.

Marking
How many times has your dog locked its eyes on the ducks that fly away only to miss seeing the one that falls? Frustrating, isn’t it? Because retrievers are most successful when they see where the birds fall, make sure your canine pal expects the action to happen in the direction your gun is pointed. Teach him to follow your gun barrel so that his eye is on the bird you’re targeting.

For this exercise, practice in a simulated duck blind. With the dog beside you, shoulder a shotgun, swing it in the direction of a hidden helper, and fire a blank shell. When you shoot, the helper should throw a dummy high in the air where the dog is sure to see it. Keep changing the angles and distances of the shots until the dog sees that the action always happens off the end of your gun barrel.

[NEXT “Lining”] Lining
I’ve seen so-called trainers use cattle prods, whips, and shock collars in attempts to force dogs to run out in a straight line over long distances. In every case these actions frightened the dog, made it afraid of training sessions, and undermined its self-esteem. Instead, you can take advantage of the fact that retrievers have a natural inclination to run back over a path. It’s much more effective to build your lessons around this instinct.

With the dog at heel, drop a dummy and walk away in a straight line. Indicating the direction he should go with your hand next to his muzzle, send him back over his path to make the retrieve. Start with short distances, and then bump up the range. Once he consistently runs back without veering from course, you can begin directing him over lines he hasn’t run to previously hidden dummies. When he realizes that there is always an object to retrieve in the direction that you indicate, he’ll learn to trust your hand and run farther on a straight line to find the object. Eventually, that will be a duck you shot on a long crosser, and all the hard work of training will pay off.

Obeying Hand Signals
Unless the dog believes that you would never send it on a useless errand, hand signals are meaningless gestures to him. To convince him that hand signals always lead to a bird, train him to obey them over short distances. This way the dog is sure to find the object every time. Gradually increase the range a few steps at a time until the ddog catches on.

If Fido fails to find the dummy, he will blame your signaling, which causes him to lose confidence in you. To restore his faith that you will never steer him astray, follow up failures with shorter retrieves until he’s back on track.

Begin with the dog at heel as you drop a pile of dummies and walk away in a straight line. After a short distance, give the sit command, and then take a few steps farther along the same line. Raising your arm straight up, command the dog “back” over his own path to make the retrieve.

Once he becomes proficient at this, have him walk at heel as you place another pile of dummies a short distance to the right. Walk the dog back to the starting position. Extend your arm to the right and command “over.” When he gets the hang of that, begin mixing “back” and “over” commands, keeping the distances short. Eventually, you can add a third pile of dummies on the left side and practice “back” and “over” in both directions. Sending a retriever over established paths to dummies he knows are there focuses the lesson on the meaning of the hand signals.

Delivery to Hand
Retrievers should always deliver to your hand-they should never simply drop a bird in your vicinity and call it close enough. The bird, if only crippled, may escape. Dogs resist delivering to hand because they don’t know why it’s important. But they are proud of their “catch,” so use a little positive reinforcement and trade the dog a treat for each object she retrieves to hand. If the dog drops the object, she gets no treat. If she holds on until you take it from her mouth, she gets a kibble, a pat, and a “good girl.” Once the dog understands how to make the trade, you’ll get delivery to hand every time.