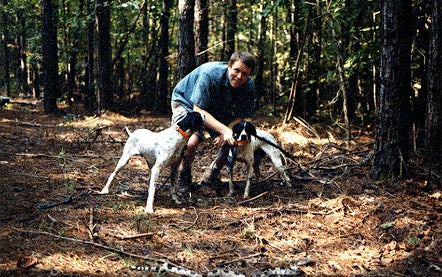 Bird hunters take great pains to break their dogs from doing precisely what Ron Sutherland has spent a year teaching his to do: point snakes. Sutherland, a graduate student at Duke University in North Carolina, has trained two English pointers to lock up like rusted bolts every time they get a whiff of Mr. No Shoulders. Now Pilot and Tessa will be used to sniff out rare species-southern hognoses, pine snakes, pygmy and canebrake rattlesnakes, and eastern coachwhips-for a research project on habitat conditions for threatened and endangered snakes.

“It’s been an uphill battle getting these dogs disinterested in quail,” Sutherland admits. But by using fake rubber snakes as dog toys, he’s got them “pretty excited about reptiles.”

Although he is going against the grain of contemporary training methods, Sutherland was surprised to learn that he is reviving something of a long-forgotten tradition among hunters. “I’ve found numerous references to people hunting rattlesnakes with dogs in Florida and the Midwest,” he says. One of them was in a 1908 issue of Forest and Stream-an early competitor of this magazine.