Why you should learn to swing wet flies before the hatch. 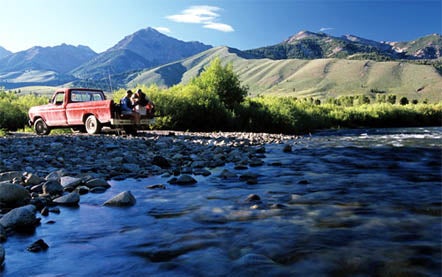 A friend and I were standing on the bank of a river in western Colorado one afternoon, with our rods tucked under our arms, watching trout feeding on mayflies. Usually when fishermen are doing that they’re planning their next move, but in this instance we had simply caught so many trout before the fish even started to rise that we were taking a break.

We’d arrived on the water hours before the expected afternoon rise and decided to split up and swing wet flies, hoping to pick up a few fish before the main event began. As it turned out, that tactic was the main event.

My standard fly for this kind of fishing is a lightly weighted size 14 Hare’s Ear soft hackle. This is one of any number of flies that don’t mimic any insect in particular but, by virtue of being a medium-size drab shape with legs, could pass for just about anything. These and other simple wet flies and soft hackles-the Brown Hackle Peacock, the Muskrat, the Starling and Herl, the March Brown, and the Leadwing Coachman-have been catching fish for centuries.

**Swing, Step, Swing **
The traditional wet-fly style that would have been entirely recognizable 100 years ago is still effective: Start with an across and slightly downstream cast, followed by an upstream mend. Let the current swing the fly down and across the river on a tight line until it hangs straight below you, and allow it to hover for maybe 30 seconds. Then take two steps downstream and do it again.

I’ll often use this technique when I’m expecting a hatch but the bugs haven’t started coming off the water, or when the hatch has started but not many fish are rising. It’s also a great way to survey a trout stream. Fish the water in roughly 3-foot-wide stripes, so virtually every trout in the river sees your fly. This way, you can cover vast amounts and types of water, stopping only to go around logjams, beaver dams, and other fishermen. The method works especially well in faster or more broken water. Fish don’t see the fly coming-it’s just there and gone in a second or two, and they’ll often grab it out of pure instinct.

[NEXT “Story Continued…”] These strikes can be vicious, so tie on a slightly heavier tippet than you’d use for dry flies or nymphs, anywhere from 3X to 5X, depending on how murky the water is. Since I’m usually anticipating a hatch, I generally attach that tippet to the end of a standard dry-fly leader nail-knotted to a floating line. If you want to start imitating surface bugs, just add some finer-diameter tippet and tie on a dry fly. Conversely, if you want to get deeper, tie on a weighted version of the wet fly or nip on a single small split shot.

**The Miss-Take **
The most common problem you may encounter when swinging wet flies is missing strikes. On most takes, you’ll be facing downstream at a trout that’s facing upstream. When you set the hook, you may pull the fly out of the fish’s mouth. I learned a solution to this problem from a steelhead guide in Oregon a few years ago. Some steelheaders use what they call a “shock loop,” a few inches of line hanging loosely between the reel and the index finger on the rod hand. If you hold the loop lightly and let it go when you feel a strike, the fish has time to take the fly and turn, so that when the line tightens against the drag of the reel, it’s hooked solidly in the corner of the jaw. And the shock loop has the added benefit of absorbing the impact of a hard strike.

Some days, swinging wet flies is just a pleasantly old-school way to fish between hatches, but when caddis and mayfly nymphs are milling around in preparation for an impending hatch, you’re missing out if you don’t give this method a shot.

Heavy Lifting
Another way to imitate emerging mayflies or caddisflies is to use a technique called the Leisenring Lift. Cast upstream and let your fly sink as deep as it will go, then lift the rod slowly annd gently and let the force of the current swing the fly off the bottom and up toward the surface. This gives the fly a vertical action that some say is even more realistic than the horizontal wet-fly swing.