Hunting ruffed grouse in the Upper Peninsula offers you the chance to work very hard for a very few shots that you will probably miss. That's part of what makes it so much fun. 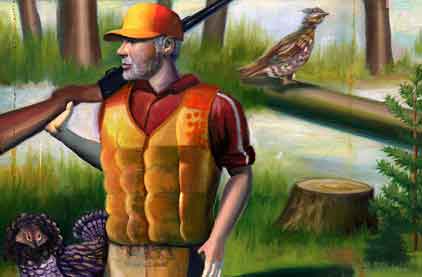 More than 20 years ago as I crossed the border into middle age, I promised myself that I would return to Michigan’s Upper Peninsula every year to hunt ruffed grouse until I was too lame to walk or too blind to shoot. It’s one of the few resolutions I have actually kept, and now that I am, by decree of the Social Security Administration and AARP, an official old guy, but still sound of wind, limb, and eye, I intend to keep on keeping on.

My choice of where to go is dictated as much by emotional and aesthetic reasons as by practical considerations. The U.P. is wild, a kind of mini Alaska, and that wildness is among the things that attract me. I like hunting in places where you can get lost. I don’t mean temporarily turned around, but downright lost. Though I am fairly skilled at land navigation, on several occasions in the U.P., I have been utterly bewildered as to where I was and have had to spend hours finding my way back to my truck and civilization.

Stretching east to west for about 300 miles and north to south for 150, the Upper Peninsula is more than half covered by national and state forest. Much of the rest-hundreds of thousands of acres-is owned by pulp and logging companies but is also open to hunters and fishermen. Alger County, where I do most of my hunting, has a population density of about four people per square mile, which meets the U.S. Census Bureau’s definition of a frontier. Up there, you’re as likely to encounter a bear, wolf, or bobcat as you are a person. I don’t have to ask a landowner for permission to hunt; I just park near likely bird cover, let the dog out, load my gun, and go. It’s simply wonderful.

The U.P. is more of a recycled wilderness, however, than a virgin wilderness. Over the past 125 years, it has been used and abused by loggers and iron and copper miners. Its immense white pine forests, millions of acres of trees taller than 10-story buildings, were cut down during the lumber boom of 1880Â¿Â¿Â¿1910. Once it had all been exploited, it was left to its own devices and the woods grew back, though not with anything like their primeval magnificence.

Today, the white pine stumps that spread over loamy, lichen-covered plains resemble tombstones, which, in a sense, they are. These secondhand forests seem to breathe a melancholy atmosphere, as though they have a memory of the slaughter committed against their ancestors.

Logging continues on the U.P., which is a good thing for its inhabitants, who need the work, and for the grouse hunter. The bark and snarl of chain saws isn’t pleasing to the ear, nor is a clear-cut pleasing to the eye, but the fact is that logging sites become magnets for grouse. Aspens sprout amid the slashings and grow to 10 to 16 feet within a few years, providing grouse with cover and food. The young trees seem as thick as grass on a golf course, making shooting difficult, and walking through piles of branches and rotted stumps is as treacherous as it is tiring, but these areas almost always produce birds. [NEXT “THE FEATHERED BULLY”]

The Feathered Bully
When I was young, I thought the bird was called a “rough grouse” and wondered how it had got that name. Was it a feathered bully? Or did the adjective refer to the nature of the bird’s thickly wooded, brushy habitat?

On my first grouse hunt, in the fall of 1962, I formed another theory. My friend Bill and I joined his uncle, an enthusiastic grouse hunter, at his cabin on Michigan’s Upper Peninsula.

“No wonder they’re called Â¿Â¿Â¿rough,’ because it sure is rough to hit them,” I’d said after Bill and I, jump-shooting from logging roads, had failed to hit a single bird on the wing. Our bag-one apiece-was obtained through unsportsmanlike conduct: I blasted mine out of a tree. Bill got his on the ground.

I don’t recall whether we admitted this to his uncle, but I do remember him correcting my error in nomenclature: “It’s ruffed grouse, Phil,” he’d said, fluffing t dark neck feathers that form a frilly collar when extended.

Now that I had the name right, the next step was to learn to shoot them in the approved manner-while the birds were flying. I had shot my share of pheasants and waterfowl, but the lessons gleaned in duck blinds and Midwestern cornfields were of little use. Grouse appeared and disappeared like apparitions, vanishing before I could get a bead on them.

Although my average has improved over the years, I still haven’t learned how to hit them with even reasonable consistency. Exploding from cover with the sound a playing card makes in the spokes of a bicycle wheel, only louder, the ruffed grouse darts through the woods, its mottled brown, gray, black, and white combining with its speed to make it practically invisible.

Once in flight, the bird has an uncanny ability to put a large tree between you and it. You’re dead on, you shoot, but all you see are shredded leaves. For this reason, I prefer hunting them in the mid- to late afternoon, when they are apt to abandon their forested coverts for edges and for black cherry and willow thickets that dot the meadows, thus presenting opportunities for an open shot. Jack pine plantations are also favorable to the hunter. Grouse like to roost amid these scraggly trees that, planted in rows, offer shooting lanes not found in natural woods. [NEXT “A BIRD FOR THE HARDCORE FEW”]

A Bird for the Hardcore Few
The very difficulty of the sport is what makes it attractive. Like dry-fly fishing, it goes against the current of our culture, which is to make everything faster, easier, more efficient, and convenient. If you really love driving interstates, eating Happy Meals, and going to shopping malls, grouse hunting probably isn’t for you. You will tramp 5 to 8 miles a day through rugged country, get shots at perhaps half the birds you see, and consider yourself lucky if you drop half of those.

There are two rewards for all this effort: the satisfaction of making a fine wing shot and the exquisite taste of grouse. Its diet of seeds and berries and its sedentary ways give the grouse’s white meat a distinctive but delicate flavor, less gamy than woodcock, ducks, or doves. Put your mouth to a grouse stuffed with apples and baked in Calvados and you’ll find yourself able to eat the lumps of tissue paper sold as chicken in supermarkets only when faced with starvation.

Wildness and solitude compensate for the frustration of birdless days. I recall one such a couple of years ago. Skunked, my dog and I reached the banks of a lonesome, beautiful brook-trout stream. I sat high on a bluff under a stand of tall white pine, looking down at the river curving into a deep, umber-colored pool. Beyond the river, forests of fir and spruce reached as far as I could see, and there was no sound but the wind in the trees. Then out of the woods came a cautious buck. His white tail flashed when he saw me, and he bounded off. That moment made up for all the hard, fruitless effort.

And there are other memories. Two years ago I was hunting an old logging slash near a hamlet called Melstrand. It was a late afternoon in mid-October. In the slanting, amber light, the aspen and maple leaves glowed as brilliantly as electric lamps. As I walked back to my truck, my dog, an English setter bitch named Sage, started to sniff the ground, working back and forth in ever tighter circles.

Watching her, I knew she was tracking a grouse that had walked from one patch of cover to another. Sage began to creep. Suddenly, she slammed onto a hard point near a baby spruce, her tail straight out, her belly only a few inches from the ground, her body trembling. I could see the concentration in her caramel-hued eyes and was sure she wouldn’t have flinched if I had exploded a firecracker a foot from her ear. But it was the effect the afternoon light had on her color that captivated me most-she appeared to be on fire, each strand of white fur a thin, copper flame.

A big, rufous grouse burst from under the spruce. I shouldered the gun, pulled the trigger, and realized that I’d forgotten to take the safety off. By the time I got around to doing this, the bird was 50 yards out, sailing away over a clearing. I fired twice and clean missed. And I didn’t mind at all. The picture of Sage filled my heart and burned itself into my mind, a living, mental photograph that I could call up any time I chose. Sage and I will be at it again this fall. It is a ritual I look forward to all year, and look back on with pleasure when it’s done. of white fur a thin, copper flame.

A big, rufous grouse burst from under the spruce. I shouldered the gun, pulled the trigger, and realized that I’d forgotten to take the safety off. By the time I got around to doing this, the bird was 50 yards out, sailing away over a clearing. I fired twice and clean missed. And I didn’t mind at all. The picture of Sage filled my heart and burned itself into my mind, a living, mental photograph that I could call up any time I chose. Sage and I will be at it again this fall. It is a ritual I look forward to all year, and look back on with pleasure when it’s done.