Pheasants are big birds that live in wide open country and usually present easy going away or quartering shots. So why do hunters miss them so often? Here's how not to. 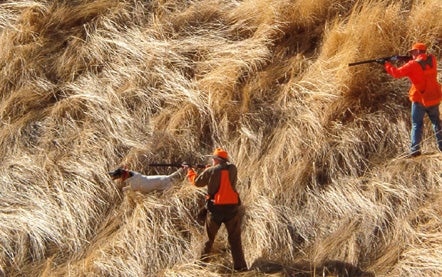 On opening day last fall, my friend Dave confidently raised his gun to shoot the first rooster of the year. At precisely that moment, a hen flushed between his boots and tried to fly up his pants leg, its wing tips battering against his brier chaps. Dave jumped several feet and emptied his gun. The rooster flew on unscathed.

That’s the most spectacular miss I’ve ever seen on a rooster but far from the only one. At 3 pounds, with short, stubby wings, pheasants make a fat target with a white aiming ring draped around their necks. They live in wide open country. Most of the shots they present are going away or quartering, which requires little forward allowance. Yet every year, thousands of hunters stand stupefied in fields, empty shells at their feet and a healthy ringneck a dot on the horizon, asking themselves, How could I ever have missed that one?

How, indeed? Here’s how not to, starting with your first boot step:

STAY ON HIGH ALERT Pheasants escape by catching hunters unaware. One minute you’re trudging along, eyes on the ground; the next, there’s a big, loud copper-colored bird in your face and you’re scrambling to get the gun on him. That’s why you have to believe a bird can flush at your feet with every step you take. Keep your eyes up and expect a bird to pop into your field of view. Imagine pheasants scooting unseen ahead of you, because they are. Be especially alert as you approach any place where they might sit tight or fly, such as the end of a grass strip or food plot, a field corner, or someplace where the cover turns from heavy to light.

FOCUS ON THE RING Even when you’re paying attention, a flushing pheasant startles you. After 25 years of chasing them, I still hear a frantic little voice in my head saying, There it is! Rooster! Don’t screw up! Aaauugh!

How you convert that panic into action during the next split second determines whether you will hit or miss. Jerk the gun up and start pulling the trigger in self-defense, and you’ll miss. As often as not, you hear a bird flush before you see it. Get your eyes on the target: not the pheasant, but the white ring around his neck. You need to edit out all the color and noise of the beating wings and the long, snapping tail, and draw your focus down (“like pulling the drawstring on a duffel bag,” as one target shooter puts it) until your eyes are on the ring or the head. As your gaze settles, take a short step toward the bird with your left foot (if you’re right-handed). Bring the gun to a ready position, parallel to the ground, butt lightly under your arm, muzzles pointed in the direction of the bird. Do not start swinging the gun at it until you see it clearly.

BE SMOOTH Forget about speed. Smoothness will put this bird in the bag. Trace its flight with the muzzle as you bring the gun to your face. English shooters describe the swing-through method as “butt, belly, beak, bang.”

EYES ON THE BIRD, NOT THE BEAD A pheasant beating its way across a huge field of grass invites measured aiming. Drawing a bead is a phrase that should be purged from the language of shotgunning. When your eye goes from the bird to the barrel to check your lead, the gun stops, and you miss so far behind that you won’t even ruffle those 2-foot-long tail feathers. Rather, keep your eyes on the pheasant and shoot the instant the butt hits your shoulder.

DON’T LOOK UP You still have one last chance to miss. If you lift your head the better to see the pheasant fall, you’ll watch him fly away instead. But if you keep your cheek on the stock, he’ll be on the ground. Go get him.