What do you call a three-legged dog? In this case, "Champ." Check out this story about a handicapped pointer who's won so many competitions you wonder if a fourth leg would only have slowed him down. Reported by Tom McIntryre. 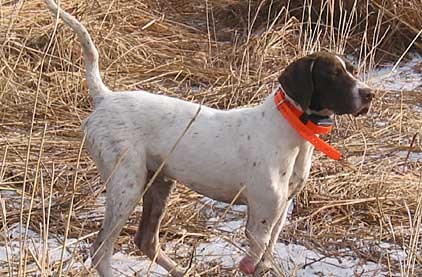 Two years ago, Larry Crouch and his family got a free bird dog. The pup, an Elhew English pointer, was a giveaway because he’d been born with a right front leg that hadn’t fully developed. Normally, a dog, especially a hunting breed, with such a birth defect would be put down right away. But something about this pup drew people to him, and beguiled Crouch into taking him home. He became an instant member of the family and was named Hobbs.

This would be nothing more than your basic “happiness is a warm puppy” story if Crouch had not become interested in tournament hunting. In this sport, a dog and a hunter have 20 minutes to find and point three planted birds, get them to flush, shoot each with one shot, and retrieve each bird back to the hunter’s hand. Somehow, Crouch knew that this was something he and Hobbs were meant to do together.

At nine months, Hobbs went into training, and when he began competing in events sponsored by the National Bird Dog Challenge Association (NBDCA) and the Tournament Hunter Champions Club (THCC), he immediately showed enormous talent and tremendous heart. Even Crouch’s rivals on the circuit were won over by the pointer’s amazing drive. Today, total strangers walk up to Crouch and ask, “Where’s Hobbs?” And the mention of his name at tournament banquets can produce sustained chants of “Hobbs! Hobbs! Hobbs!”

More than just a sentimental favorite, Hobbs has proven to be a determined and able competitor, as well as a potential champion. In 2005 he held second place for the “High Point” dog in the NBDCA Hunter Division national standings, finishing in the top ten in both the Hunter and Puppy Divisions. This year he was the number-one qualifier in the Top Gun Division at the NBDCA/THCC Nationals in Davis City, Iowa; and last March, Hobbs qualified for the Midwest Series Nationals by placing second at an event held at Bear Lake Club in Ridgeway, Missouri.

As Hobbs continues to pile up points, you have to wonder how far he could have gone on four good legs. Then again, in Hobbs’ case, maybe an extra one would have just slowed him down.