Perfect conditions on the prairie might make this season the best in years. 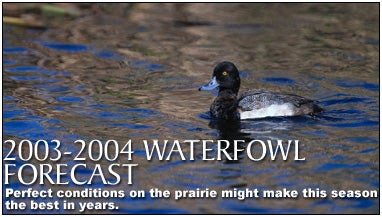 This is what you’ve been waiting to hear: The ducks are up there, in quantities that we haven’t seen in at least three years. More mallards. Bucketfuls of bluewing teal. A surprising bump in pintails. Each spring the U.S. Fish and Wildlife Service and Canadian Wildlife Service conduct a massive count of breeding ducks across North America’s most important nesting grounds. Later in the summer another round of monitoring flights tallies broods of mallards, gadwall, pintails, scaup-nearly 20 species of waterfowl, all told. And the word from Duckville this year: Get ready.

The estimated breeding duck population in the traditional survey area-basically the midcontinent from the Dakotas north, plus part of Alaska-rose from 31.1 million birds in 2002 to 36.2 million, a 16 percent gain. Mallards, a benchmark species, were up 6 percent over last year’s figures. In fact, all 10 of the species monitored in the midcontinent survey posted increases, with a total breeding population 9 percent greater than the 1955Â¿Â¿Â¿2003 average.

Why all the ducks? Habitat improvements by private conservation groups and farmers played a role, to be sure. But this year the big news was lots of water at crucial times. The number of ponds counted during May flights nearly doubled, from 2.7 million last year to almost 5.2 million in 2003.

In the eastern survey area, the numbers are mixed. The total breeding population estimate for 2003 was 3.5 million birds, 21 percent lower than in 2002 yet still 6 percent above the long-term average. Mallards are the lone bright spot, up 30 percent. But East Coast hunters shouldn’t despair. The eastern survey is only eight years old, a slim database compared to the half century of records for the rest of the continent, and not yet as reliable. “And a big part of the overall drop came from a 30 percent fall in merganser numbers,” points out Robert Blohm, USFWS chief for populations and habitat assessment. Besides, Atlantic Flyway gunners don’t just draw from eastern birds. “We get birds from a lot of places,” explains Jerry Serie, the USFWS Atlantic Flyway biologist. “Canvasbacks from Manitoba and Alberta, greater scaup out of the Northwest Territories, and plenty of mallards and bluewing teal from the Canadian prairies and parklands.”

So, will a great breeding season translate into a banner year in the blind? Maybe. Scientists caution duck hunters not to clear out the freezer yet. “Fall migration flights aren’t just a matter of spring water,” Blohm explains. “Nesting cover, brood habitat, how quickly farmers get into their fields, and winter weather all factor into the number of birds you might see over your decoys.” And a number of duck populations still remain below long-term averages-northern pintails, greater and lesser scaup, ringnecks, and widgeon among them.

Still, the information gleaned from the largest annual wildlife survey in the world augers well for the winter of 2003Â¿Â¿Â¿2004. If weather conditions cooperate, this duck season could be one to remember. “It’s good news, no doubt about it,” says CWS biologist Dan Nieman. “Essentially, though, there’s only one way to find out if birds made it to your favorite swamp or slough. Put on your waders and get out there.” (To download a copy of Trends in Duck Breeding Populations, 1955Â¿Â¿Â¿2003, go to migratorybirds.fws.gov.)

Best News: Pintails
Waterfowl biologists are cautiously optimistic that 2003 is the year northern pintails will turn the corner. These graceful birds, beloved by hunters from California’s Central Valley to the brackish Carolina sounds, have been beleaguered. Last year’s breeding population of 1.8 million ducks was the lowest on record, 39 percent below the long-term average (and but a fifth of the population peak-more than 10 million birds in 1956). But this past spring, pintails found prairies full of water and wet fields cloaked in stubble, their preferred nesting habat. More than 2.5 million were counted in the breeding surveys, up 43 percent over 2002 figures. The birds have a long way to go-they are still 54 percent below the target set for their recovery. “But this is a big step forward,” Blohm says. “If we can get a string of good production years, the world will be a different place for pintails.”

Other big gains in the 2003 surveys involved regional populations of several duck species. In southern Alberta, the number of breeding widgeon soared 70 percent over last year’s figures. Canvasbacks, the prized diving ducks that have long been on the skids, saw a banner year-up 381 percent in southern Alberta and 166 percent in neighboring portions of Saskatchewan. Alaska and the Yukon Territory hosted 364 percent more gadwall than in 2002. And across the traditional survey area, greenwing teal were up 46 percent over the long-term average.

**Best Habitat Recovery: Southern Saskatchewan **
“It’s probably the fastest reversal in habitat conditions and duck production that we’ve ever seen in the prairies,” exults the CWS’s Nieman, who is based in the province. A huge April snowstorm, followed by consistent spring rains, brought breeding habitat to peak condition in Saskatchewan’s famed “duck factory.” The numbers from the southern Saskatchewan prairies-perhaps the most critical duck nursery in the world-almost defy belief. Total breeding duck numbers in May were up 162 percent from 2002, and more than 25 percent above the long-term average. Northern pintails posted a whopping one-year gain of 446 percent, and other ducks followed suit, such as mallards (up 74 percent), gadwall (up 199 percent), bluewing teal (up 188 percent), and redheads (up 186 percent). May pond counts in southern Saskatchewan were up 238 percent over 2002 figures, a level 9 percent above the long-term average.

Trouble Spots: American Prairies and the East
Big gains make the headlines, but not all the 2003 counts are positive. Certain geographic regions still suffer from dry conditions and correspondingly paltry duck populations. Habitats in the aspen parkland region-the transition zone between prairie and dense boreal forests-in parts of Alberta, Manitoba, and northern Saskatchewan are classified as “poor.” The moisture that soaked Saskatchewan came too late for parts of the American prairies. Total breeding duck numbers for the eastern Dakotas fell by 21 percent over 2002 figures. Of the 10 most abundant species monitored in New York, Maine, Quebec, Ontario, and the Canadian Maritimes, all but mallards took a tumble.

Species that still require a close watch include some hunter favorites. Massive research and management efforts have begun to stem the loss of pintails and greater and lesser scaup, but none of them are out of the woods yet. Midcontinental scaup numbers climbed 6 percent over 2002 figures, but that’s still down nearly a third from the birds’ long-term average of 5.2 million bluebills. In the East, ringneck ducks continue their decade-long roller-coaster ride. This year’s population of 3.9 million is down 5 percent from last year’s and 19 percent off the long-term average.

The Long-Term Plan: Reaching Ideal Numbers **
Year-to-year duck population changes might prompt some hunters to lay in a store of nontoxic shot, but most scientists look more closely at long-term numbers and population targets. Established in 1986 by the United States and Canada and joined in 1996 by Mexico, the North American Waterfowl Management Plan set population goals for most species of waterfowl. In 2003, the breeding population of gadwall, greenwing and bluewing teal, and northern shovelers surpassed those targets, whereas mallards, redheads, and canvasbacks missed them by only a tiny percentage. The rest of the ducks, from scaup to widgeon to pintails, are well below the marks. **Goose Report: Growing Numbers
Ducks didn’t corner the market on good news in the 2003 waterfowl surveys. Canada, snow, and whitefront goose numbers also rose across the continent, thanks to early spring thaws that gave the birds a jump on the breeding season.

Biologists keep tabs on more than two dozen separate subpopulations of geese, making overall numbers difficult to pin down. But only one of those subpopulations, Canada geese in the shortgrass prairie region, took a nosedive this year. From the Rockies to the Delmarva Peninsula, biologists forecast a larger fall flight of honkers than in 2002.

Breeding populations of Southern James Bay Canadas jumped by 55 percent over 2002’s figures, which is welcome news for hunters as far-flung as Michigan and the Southeast. And populations of the giant Canada goose of the Mississippi Flyway continue to climb, with spring survey numbers increasing an average of 6 percent per year since 1993. corner the market on good news in the 2003 waterfowl surveys. Canada, snow, and whitefront goose numbers also rose across the continent, thanks to early spring thaws that gave the birds a jump on the breeding season.

Biologists keep tabs on more than two dozen separate subpopulations of geese, making overall numbers difficult to pin down. But only one of those subpopulations, Canada geese in the shortgrass prairie region, took a nosedive this year. From the Rockies to the Delmarva Peninsula, biologists forecast a larger fall flight of honkers than in 2002.

Breeding populations of Southern James Bay Canadas jumped by 55 percent over 2002’s figures, which is welcome news for hunters as far-flung as Michigan and the Southeast. And populations of the giant Canada goose of the Mississippi Flyway continue to climb, with spring survey numbers increasing an average of 6 percent per year since 1993.