How today's nontoxic loads stack up. 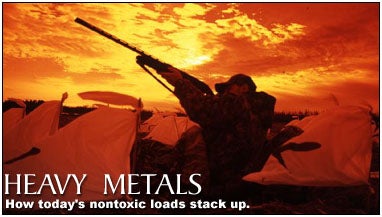 When lead shot was banned for all duck and goose hunting in 1991, waterfowlers had two options: Use inferior steel shot or hang up their decoys. How times have changed.

Today’s waterfowl hunters have a variety of nontoxic shot loads to choose from. However, no one type is perfect for every application. Each has distinct advantages and disadvantages.

Chief among the latter is price. Premium nontoxic loads can cost up to four times as much as steel shot, which is why steel remains the most popular choice. Improved powder and wads have made steel more lethal than ever, especially when loaded at high velocities, but there’s no getting around the fact that steel (at 7.8 grams per cubic centimeter) is only about 70 percent as dense as lead. As a result, it loses velocity much more quickly and has only about half as much energy at 40 yards. Unless you only shoot decoying birds at close range, that’s reason enough to try one of the following premium loads. Your retriever will thank you.

**Bismuth **
The first premium nontoxic to win federal approval, Bismuth is a traditionalist’s dream. It’s harder hitting than steel and as soft as lead, which allows it to be safely shot in older guns with thin-walled or tightly choked barrels. Bismuth is somewhat brittle, however, and can sometimes produce erratic patterns.

Tungsten-Iron **
Federal’s Tungsten-Iron, with 94 percent of the density of lead, is loaded at high velocities and has excellent downrange energy. Because it requires a thick shot cup, however, each shell contains less shot, which limits its maximum effectiveness to the high-capacity shells. It’s excellent for pass-shooting geese and open-water ducks. Use large shot (No. 2¿¿¿BBB) in magnum 10-gauge or 31/2-inch 12-gauge loads for best results. **Tungsten Matrix
Tungsten Matrix is the most like lead of all the approved nontoxics. A mix of tungsten and plastic polymer, it’s 97 percent as dense as lead and even softer, which results in comparatively loose, long-range patterns. It’s a good choice for close to midrange shots at ducks when hunting thick cover where quick, sure kills are needed to cut down on lost birds.

Hevi-Shot
An amalgam of tungsten, nickel, and iron, Hevi-Shot is the latest and greatest. It’s 10 percent denser than lead shot and produces tight, devastating patterns. Approved in 2001, it has quickly won converts, despite the fact that it’s harder than steel and among the most expensive nontoxics. Because it has superior downrange energy, you can drop down one or two shot sizes for denser patterns.