Still-hunting tips from a master of the game. 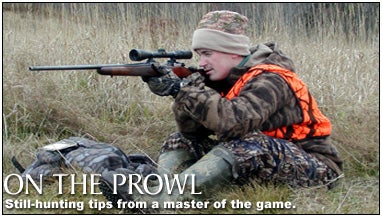 At this time of year, most hunters take a stand, hoping to ambush deer they’ve patterned. But New York whitetail expert Bill Vaznis thinks it’s time for more whitetail hunters to come down from the trees. Vaznis, a dedicated and successful still-hunter, has no prejudice against elevated platforms. He just doesn’t like limiting himself. “When all you do is sit in a tree, you immediately rule out a whole lot of good deer territory,” he says. “When I still-hunt, I can cover spots the stand guys ignore. “Some of my favorite spots for still-hunting are overgrown pastures, weedy ditches, fencelines, CRP fields, old apple orchards, abandoned farmsteads, power lines-all those places where you can never find a tree to hang a stand. These are also places deer love, not only because of the good habitat, but because deer rarely encounter hunters there.” The Essentials of Sneaking Vaznis slips through such areas during the prime times of morning and evening, letting terrain, sign, and the presence of deer dictate his pace. “In thin, open cover I may be able to cover 100 yards in a few minutes. In a thick apple orchard full of sign and with deer on their feet, it may take me all evening to go the same distance.” Spotting whitetails before they spot you is the essence of the game, according to Vaznis. “I keep the wind in my favor, of course, and I use shadow and cover to hide my silhouette. Soft clothing like wool helps me minimize noise, but it’s not necessary to be completely quiet; most every animal that moves makes noise, including deer. You just don’t want to sound like a man with a place to go. And I use binoculars every time, without fail. Not only do they help me spot deer I’d never see otherwise; they let me check out rubs or scrapes without having to walk right up to them.” Low-Impact Since Vaznis may revisit prime spots several times in a season, he practices low-impact hunting. “Actually, I’m less concerned about my airborne scent than I am about what I leave on the ground,” he notes. “So I wear rubber boots with fox or coon urine on them. I try not to take the same route on every hunt. And I don’t hunt good spots more than twice a week.” Though he’s taken many bucks with this method, a 9-point Iowa giant stands out. “I found his scrapes along a brushy creekbottom on public land,” he recalls. “I knew he was hitting them in the morning because the dirt was kicked back toward the feeding area. So I was back at daylight, sneaking along the scrape line. When I first saw the buck, he was 50 yards away and getting closer. He never knew I was there until it was too late. There were cars parked all along that road, and all those guys were back in the timber, sitting in tree stands.”