One man's nuisance is another man's windfall. 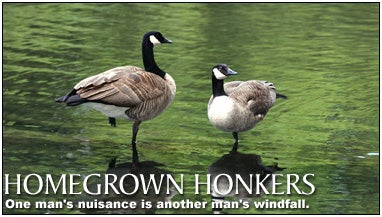 The U.S. Fish and Wildlife Service has a problem. And in this case, what’s bad for the goose manager is good for the hunter. Soaring populations of resident Canada geese have resulted in special early seasons that present a great opportunity to start the fall with a bang. Daily bag limits during these so-called “nuisance” seasons often exceed those of the regular season, and the shooting can be fast and sustained. Although resident Canadas are fundamentally the same birds as migratory Canadas, they require slightly different hunting tactics. The most important of these is pre-hunt scouting. “These geese live in a given area year-round and know exactly where they want to feed,” says Maine goose guide Dave Hentosh of Smoldering Lake Outfitters (207-429-0910). “You can’t just set up in any field along a flyway and expect resident geese to come and give you a look. Residents have specific daily patterns, and you have to learn them to be successful.”

It’s worth the effort. Once you find an active feeding field, you’re almost guaranteed good shooting. Plus, landowners commonly welcome goose hunters, so it pays to knock on doors.

It’s also critical not to hunt a productive field on successive days. “If you can hold off and rest a hot field for three or four days between hunts, it will be just like opening day when you go back,” Hentosh says. “And when you get a quick limit, pick up and leave immediately, so that latecomers won’t be needlessly spooked.”

The large, tight decoy spreads commonly used for migratory honkers can be a turnoff to the homegrown variety. In September, resident Canadas are still in semiterritorial family groups that are just starting to assemble into larger flocks. Spreads for these birds should be set up in clumps of four to eight decoys, dispersed over as large an area as your group can cover. Two or three dozen full bodies are usually ideal. Concealment is another factor. Vertical blinds that pop up overnight can spook resident geese, which know the fields they frequent like hunters know their living rooms. It’s better to lie down among the decoys and carefully match your camo to the cover.

Calling is less important with resident Canadas than it is with migratory birds. But one call that early-season hunters should master is the lay-down, a family-assembly call that consists of long, drawn-out honks. When done aggressively, it can bring young birds back after an initial volley has been fired, something goose managers would like to see happen more often.