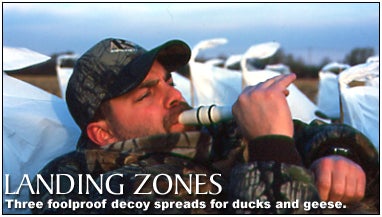 There are only two places to set decoys, a wise guide once told me: “where a bird wants to be, and where he don’t mind going.” Although where you put yours is vital to bringing ducks and geese over the blocks, how you arrange them determines whether you bag those birds or not.

You want your spreads to attract and guide birds into a landing hole close to the blind. But I’ve seen setups so packed with decoys that waterfowl wanting to land couldn’t find an open spot to sit down. I’ve also hunted over rigs set far, far away from the blind, forcing ducks to land at the outside edge of gun range. Neither type is conducive to clean kills.

Any decoy spread begins with a landing hole, an empty spot in front of the guns where you want to see birds with their feet down and their guards lowered. Think of your feathered frauds not merely as lures but as a welcoming party directing the incoming flock to just the right place.

Use the following three rigs as essential setups to start from, and let your own experience and conditions tell you when and how to modify each spread.

The Hole Shot
Guide puddle ducks into the open water. The simplest rig for puddle ducks consists of two blobs of decoys with a landing hole between them. I make a gap 10 or 15 yards across, optimistically leaving plenty of room for a whole flock to drop in. You can throw out as few as a dozen decoys, although two or three dozen often works better. Set individual dekes 6 to 8 feet apart because puddle ducks usually sit in a loose group on the water. Be sure, too, that the farthest decoy is no more than 30 yards from the blind, in case birds alight at the outer edge or swing over the spread without setting down. Puddle ducks dislike flying over birds on the water, so leave a clear path to the landing hole. Just about any puddle species will be drawn to mallard blocks, but you can mix in high-contrast dark or light decoys such as black ducks, pintails, or even a few Canada geese off to the side to increase visibility.

All waterfowl land into the wind, just like airplanes. Whenever possible, set your blind so the wind is at your back or quartering over your shoulder, and birds will come at you on their final approach.

The Long Hook
Lay a trail for diving ducks to follow all the way to your blind. Diving ducks love big water. To attract them, your rig must extend far out from the shore blind, giving the birds a path to follow into a nearby landing hole. The classic diver spread of 50 to 200 decoys takes the form of a fishhook. Make a long trail of decoys out into the water, extending downwind well beyond shooting range. Thicken the line with more decoys as you get closer to the blind, putting the largest concentration in the curve of the hook. You can set them close together because divers often sit in a tight knot on the water with only a few feet between birds.

The inside curve of the hook forms the landing hole. Be sure it’s within gun range of the blind. Divers won’t circle a spread several times as puddle ducks will. Instead, they come in low, following the trail of decoys, and might land or just zip on by. Either way, you only get one chance at them.

The Big Ambush
Draw geese to a central drop zone with ganged-up decoys. Harvested grainfields are the place to ambush Canada geese. As a bonus, goose spreads often draw mallards and pintails, especially at daybreak. A field rig for Canadas may comprise as few as two dozen decoys or as many as 30 or 40 dozen. An average spread numbers eight dozen. Arrange family groups of five to seven geese, placing the birds 3 to 5 feet apart. Face them in any direction except straight downwind. Go 5 or 10 yards and make another group until you’ve formed a giant X on the ground. Thicken the X at the intersection with more decoys. As you add birds here, put your most realistic ones-magnuum shells and full bodies-on the downwind side. Those are the ones the geese will be staring at as they come in for a landing.

Set your blinds about 5 feet apart in the center of the X, or simply lie down underneath a magnum shell to hide. If geese come to your decoys but won’t commit to a landing and instead flare off short of the spread, move your blinds downwind and shoot as the birds pass low overhead.