Promise of the Pine Ridge

Saddle up and hunt longbeards where Crow warriors once roamed. 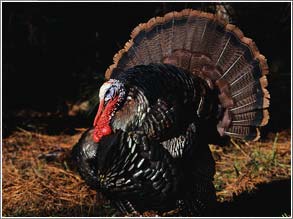 Long ridges of ponderosa pine bracketed the deep draws, and lush alpine parks garnished with wildflowers dappled the woods. Above us, sandstone parapets soared to the sky. Not the usual image of Nebraska, but this was the Pine Ridge, the forested mountain escarpment that rises up from the plains along the state’s western border. It is spectacular country — and Merriam’s turkey heaven.

I first hunted the Pine Ridge in 1997. I was on foot and confess I found the long predawn hikes arduous. Too many times I heard gobblers sounding off from high spots and cross-canyon locations that I couldn’t get to quickly enough.

“Those hills nearly killed me,” I admitted to wildlife biologist Lon Lemmon when I finally checked in a bird.

“A horse helps,” said Lon. “A horse gets you up those ridges in a hurry. Once you’re up there, you can tie the horse and hunt on foot. If you ever come back this way, let me know, and I’ll get a horse for you.”

So here I was, back again in 1999. Lon had borrowed a mount for me and had taken a couple of vacation days to hunt (and to make sure I didn’t lose his cousin’s horse).

He was right: the Pine Ridge is prime horse country. Game and cattle trails wind through the open forests, and the ground is sandy and quiet, so hoofbeats are muffled. The horses were accustomed to the mountains and quickly carried us up the steep slopes.

When we heard the first gobbler sound off, he was far away, but his voice was clear in the still dawn air. Then we heard another. This one was across a canyon from us, about half a mile off.

We turned the horses uphill, and they lunged forward, quickly carrying us up one more long, man-killing slope. We passed beneath erosion-sculptured sandstone parapets that once served as Indian lookouts. At the top, we turned and rode around the head of the canyon, then downhill toward the bench where the gobbler greeted the morning.

In a few minutes on horseback we had covered steep, difficult ground that would have taken much longer on foot. When we rode down on the gobbler, he was still in his tree. We moved in close and began calling. An hour later the gobbler hung from Lon’s saddle, and we rode around the head of one more canyon, to another longbeard whose wagon-wheel tail we had seen beckoning from a distant butte.

A few days later we tied up in a little pocket. Lon and I split to hunt separate ridges. The gobblers were henned up now and had been silent since dawn. The wind was strong, and I wondered how far I could hear a bird if one did respond.

I climbed to the base of a sandstone butte, circled toward the downwind side, then began systematically making plaintive hen calls as I moved. Soon I was out of the wind and could feel a rise in temperature. Here’s where they’ll be, I thought.

I crept forward, peeking into hidden pockets beneath me. I hadn’t gone far when I spotted turkeys; about 80 yards away, half a dozen hens were feeding in an opening. Then I saw movement at the edge of the pines.

At first I could make out only the luminous tips of his tail fan, but as the gobbler moved up the slope, the fan grew like a rising moon. He stepped into the open, glistening with green and blue, washed with iridescent bronze. He was following the hens, strutting and spitting and drumming but not gobbling.

I lay on my belly with my head over the edge of the hill, watching him through a screen of sparse weeds. I slipped out my box call and yelped softly. The tom didn’t gobble, but I saw him puff up and spasm as he spit and drummed.

I yelped again, a little louder. Again he puffed up. His head jerked and his wings shivered as he drummed once more. I plied him with hen cutts and yelps to no avail. He was unwilling to move away from his harem.

The gobbler was 75 yardsway in the open now, and I was pinned down in a clearing from which I could not move. I slipped out my spit and drum call and mimicked the big bird. His reaction was immediate: He dropped his fan, sleeked his feathers, and raised his head, one beady eye focused on my location.

I called again. That’s all it took. The gobbler went into a sinister-looking half-strut, turned away from his harem, and stalked up the hill, his head flashing an angry red, his long beard swinging like a battle flag. When he stepped past a bush at 25 yards and turned sideways, I nudged the safety off and squeezed the trigger.

I sat beside the great bird where he fell. He weighed 22 pounds, a 3-year-old with sharpened spurs and a beard nearly 10 inches long. As I looked across this glorious countryside where he had ranged, I could picture Crow warriors riding these same hills, scouting for deer, elk, or U.S. cavalry. Had there been turkeys at Pine Ridge back then, I am sure they would have enjoyed hunting gobblers, too.

Regulations and Licenses: The spring bag limit is one male or bearded female turkey per permit. Nonresident turkey permits cost $56 each, and each hunter is entitled to two permits in the Northwest Zone, which includes the Pine Ridge. Hunters must also purchase one $10 Wildlife Habitat Stamp. Licenses, hunting regulations, and maps are available from Nebraska Game and Parks, Dept. FS, 2200 N. 33rd St., Lincoln, NE 68503; 402-471-0641; http://ngp.ngpc.state.ne.us/

**Accommodations: **Historic cabins and lodge rooms are available at Fort Robinson State Park, near Crawford (308-665-2900). There are also motels in the nearby towns of Chadron and Crawford.

Both outfitters are located north of the Nebraska Pine Ridge in South Dakota’s Black Hills. Not quite the same country but similar, and the outfitters are first-rate. — J.B.R.

THE NEWCOMERS:
Aeons ago the Pine Ridge formed the ramparts that contained a huge inland sea. Today, it stands as a 100-mile-long mountain chain supporting a rich ponderosa pine forest capped by sandstone minarets. Whitetails, mule deer, and elk thrive in the Pine Ridge country, and Merriam’s turkeys inhabit the region in numbers that saturate the available habitat.

Although the climate and habitat in the Nebraska Pine Ridge country is ideally suited for Merriam’s, the Rocky Mountain subspecies never reached this isolated enclave on its own. Surrounded by hundreds of miles of prairie that the birds would not cross, the Pine Ridge held no turkeys until 1959, when the state released 28 birds.

Three years later biologists reported that the turkey population had topped 3,000, and by the mid-1960s birds had expanded into 80 percent of the available habitat. By the end of the decade, Merriam’s had populated the entire Pine Ridge region, and the state was trapping and transplanting them to other locations. Like wildfire, turkeys spread up and down nearly every wooded river valley in Nebraska.