Louisiana's fishing guides lost everything to Katrina--their boats, their houses, their marinas, and the New Orleans tourism industry. They'll rebuild, but will their customers return in time? 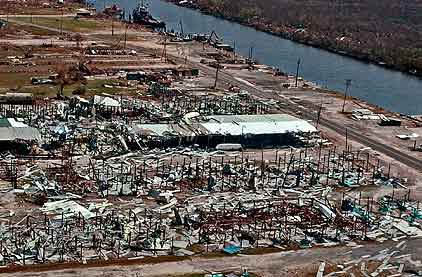 For guide Mike Frenette, life will forever be viewed in terms of B.K. and A.K.: Before Katrina and After Katrina.

Before August 29–B.K.–Frenette was one of the best-known fishing guides in the South, a man who had helped pioneer charter fishing out of Venice, Louisiana, awakening the nation and world to the phenomenal action on the Mississippi River delta and in the blue water beyond. The Teaser Club House, his floating lodge, had hosted clients, writers, and broadcasters from around the planet. He had two offshore boats, three inshore boats, an airboat, a TV series. His was a happy, if busy, life that provided a comfortable living for his wife, Laurie, and their two sons.

Katrina had demolished Venice, spreading the contents of the harbor across the delta. Frenette’s lodge, boats, and about $50,000 in fishing tackle were gone.

“The day after Katrina I told Laurie, ‘Yesterday we were on top of the mountain. Today we can’t even see the mountain,'” Frenette recalls.

“It’s unbelievable how life can change in a single day. We all knew this could happen, that a hurricane could hit us. But I don’t think any of us thought it would be this bad, this total.

Frenette has plenty of company. Charlie Smith, executive director of the Louisiana Charter Boat Association, estimates that Hurricanes Katrina and Rita delivered a knockdown blow to about 550 fishing guides in south Louisiana. For many of them it will be a knockout punch. Most lost boats, many lost lodges, but all lost the tourist engine known as New Orleans that was their pipeline to business.

The storms crashed what had been an incredible party for the local guide industry. In 10 years the number of coastal guides in Louisiana had exploded from 60 to more than 600. Much of that growth was in the metro New Orleans area, which is surrounded by marshes fertile enough to support some of the most liberal limits in the world: 25 speckled trout and five redfish per day, for example. Starting as one-man operations a decade ago, many businesses had grown to include one or two lodges, staffs of six to 10 guides, and marinas.

“Katrina left us with some piles of aluminum siding, concrete back-down ramps, and the steel structure for the boat hoist,” says Brechtel. “When I say it took everything, I mean everything.

“But it didn’t take the fish. So we’re going to rebuild–and hope the customers come back.”

How fast they return will depend largely on how fast New Orleans comes back.

“New Orleans is what made our business go, and until the city comes back, we don’t know if we can come back,” says Theophile Bourgeois, who estimated losses at his Lafitte-based Bourgeois Charters in the six figures.

“For most of our clients, we were just lagniappe (something extra) at the end of a New Orleans trip. After a business meeting, they’d come fishing. Or while the wives and daughters were doing the French Quarter thing, the guys would come fishing. But now all that’s gone. Our customer base has dried up. Now we’re in a race to see if the city can get the tourists back before the mortgage companies get the lodges, the boats, our homes.”