What Katrina started, the latest Gulf hurricane might have finished: a leveling blow to coastal waterfowl habitat. 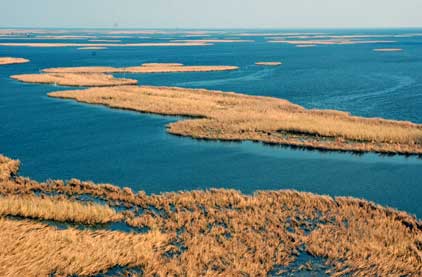 These marshes were green and connected by masses of floating plants before hurrcianes Katrina and Rita. The loss of the aquatic plants means migrating waterfowl will not stay long - and may have trouble finding enough food in other areas this winter. Bob Marshall/Times Picayune
SHARE

These marshes were green and connected by masses of floating plants before hurrcianes Katrina and Rita. The loss of the aquatic plants means migrating waterfowl will not stay long – and may have trouble finding enough food in other areas this winter.

Three weeks after Hurricane Katrina savaged the southeast Louisiana coast, sportsmen like Joe Courcelle in Jesuit Bend, about 40 miles downriver from New Orleans, were trying to view the glass as half-full. Sure, Katrina had whacked fish and wildlife habitat in the coastal wetlands, but deer would have plenty of new browse, fish would work their way back as the water cleared and–because it was still summer–the aquatic duck food destroyed by the big storm might well sprout again before most waterfowl arrived in late October. Besides, local sportsmen could still go to the largely unaffected central and southwest coasts.

Then along came Rita. By the end of last weekend, flood tides of 8 to 12 feet had submerged the entire Louisiana coast. Some 1.5 million acres of public hunting and fishing habitat on 43 state and federal wildlife management areas–more than half the state’s public hunting lands–were impacted by the vicious one-two punch.

The second major hurricane of the season not only wiped out many coastal hunting seasons. It might also have dealt a serious blow to a significant portion of waterfowl in the Mississippi Flyway.

“There won’t be a stick of duck food left in south Louisiana,” the 67-year-old Courcelle said after spending a long night strengthening a levee separating his home from the eastern reaches of Barataria Bay. “Anything we had left after Katrina was taken away by Rita. I don’t know if we’ve ever had anything like this.”

“Storms have reduced coastal waterfowl habitat in the past–in fact, many times in the past–but this may be the first time we’ve had storms eliminate the habitat,” said Robert Helm, waterfowl study leader for the state Department of Wildlife and Fisheries. “Many of these plants can tolerate salinities up to five parts per thousand, but practically the entire coast was under 5 to 10 feet of almost pure Gulf water, which is around 30 parts per thousand.

“If the surge and waves didn’t wash away the submergent (floating aquatic) vegetation, the saltwater probably killed it. And the same water was over ricefields and other agricultural fields that attract ducks and geese.”

That means the millions of waterfowl that normally winter in coastal Louisiana will be pressed into looking for other sources of sustenance. If they have a hard time finding those groceries this winter, they will leave for the return migration next spring stressed from lack of a proper diet and arrive on the nesting grounds exhausted. Nesting could be delayed, and nesting success could decline.

“The correlation between a duck’s weight and nesting success is well established, so the lack of food here could have an impact next spring,” said Helm.

“This has been one incredible hurricane season.”

And that season doesn’t end for another month.