Trophy boars are smarter than your average bear. But even the savviest old bruin has a few chinks in his... 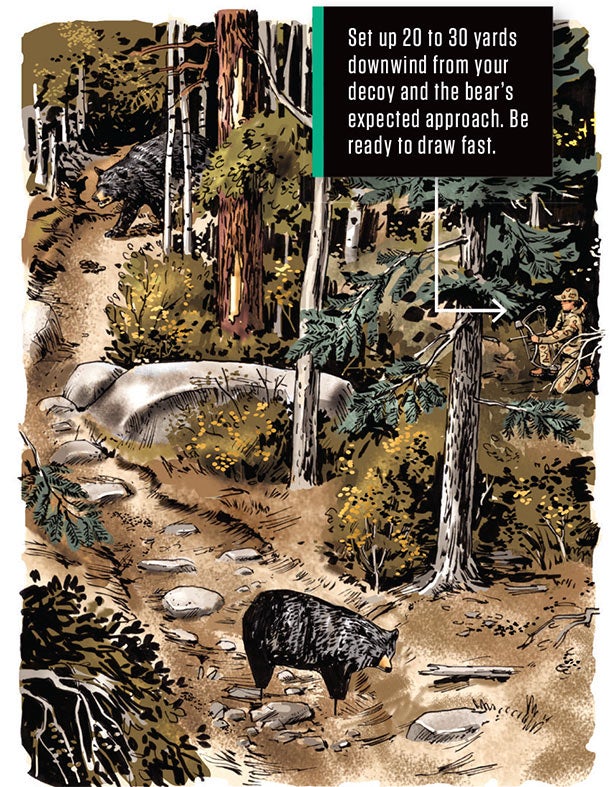 Trophy boars are smarter than your average bear. But even the savviest old bruin has a few chinks in his armor. Using a decoy is an exciting way to exploit them. Even weary old black bears will come in spoiling for a fight. Here are three strategies for drawing a dominant, hungry bruin into bow range.

The Intruder
Big boars are solitary animals and will claim a food source as their own, commonly defecating along entrance trails to warn other bears away. To get this bear’s attention, stake a small bear decoy near the food source, positioned with its head down and its backside facing the direction you expect a boar to approach. Attach a few strips of black cloth to the decoy’s ears and tail for added realism and collect some bear scat from another area–preferably from a boar–and with a plastic bag, transplant it on the entrance trails.

Now sit back. Any wise old boar that might otherwise camp just off the food until nightfall is almost sure to investigate when he sees your “intruder.” Keep in mind that a boar may visit a food site daily or stop by every second or third day while patrolling his home turf. Be patient, and don’t let your guard down.

The Easy Meal
Black bears are fond of fresh meat and will drop their guard to capture an animal in distress. Any small, furry decoy, like those used for foxes and coyotes, wiggling about in plain sight is sure to catch a passing bear’s attention. With a little luck, the bruin will move in quickly to finish off what he thinks is hapless prey. If he hangs up, though, add a few squeals from a dying-rabbit call to entice him.

If whitetail deer are prevalent in your area, a fawn decoy can be too much for any hungry black bear to ignore. Try a few fawn contact bleats, and if that fails, go to a fawn-in-distress call. Nock a broadhead and get ready. The bear will come in fast, so be prepared to shoot pronto.

The Feeding Female
You’ll have to wait a few months to use this setup, but it’s a good one to have in your arsenal. Black bears rut in late spring and early summer and will visit bait sites, looking for a sow in heat. If baiting is legal in your area, position a small black bear decoy with its head in the bait barrel, and hang a few scent canisters soaked with sow-in-heat urine 3 or 4 feet off the ground nearby.

Big boars are ultracautious around bait, so odor control is critical. As you’re setting up, wear rubber gloves and spray the decoy down liberally with a quality scent remover. The boar will approach the decoy warily. Don’t rush the shot. As he investigates, you should have plenty of time to draw.